Stray Thought of the Day: Ewoks are Evil

In "Return of the Jedi", remember how the Ewoks had captured our band of adventurers and were taking them back to their village? If it were not for Luke's quick use of the force and C3PO's improvisation as a minor diety, weren't the Ewoks going to cook and EAT Luke, Han, Chewie and the others?

Logically, can we assume then that the Ewoks may have had some success eating previous interlopers to the forest? Such as the contract crew which would have had to come to Endor to build the shield generator? And, possibly, the Storm Troopers themselves?

One has to wonder, then, if when the Rebels and Ewoks allied in the 3rd reel if the Ewoks weren't just thinking "it sure is neat how this meal is helping us catch a whole bunch of other meals! Why, when we're done consuming the white-shelled ones, we can use their head-shells as bowls or drums!" And, also, were Han and Co. not foolish for so easily trusting the little monsters once C3PO had won their freedom? After all, they had to still look quite succulent to the beady little eyes of the Ewok village. 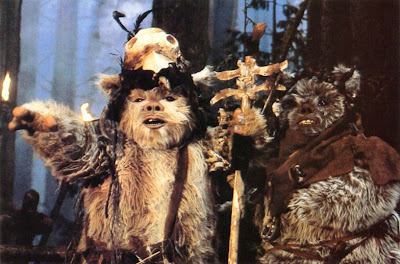 Chief Chirpa points to the proper location for the chips, veggie tray and Rack of Solo.

Perhaps it is only our genetic predisposition to see small, cute things with big eyes as innocent that keeps us blind to the menace beneath the leather hood (what kind of leather? Dried and tanned Storm Trooper flesh?).

Perhaps the Storm Troopers were in the right to want to kill themselves an Ewok, so as not to wind up as a main dish at some feast (surely blasting with the tunes of Meco).

You also kind of have to wonder how awful the 6 movie series would have wrapped up if Luke had met his fate as a casserole. 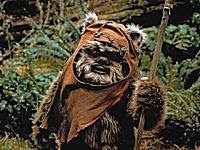 Wicket found most of the meal delectable, but the large, furry one was a bit chewie.
Posted by The League at 12:21 AM

I forget where I read/learned this but we were led to believe that the Ewoks only became violent against humans after the Empire descended on Endor. Since the Empire was trying to clear out an area to put down their shield generator they indiscriminately attacked and killed the Ewoks. This lead to the belief that all humans were evil amongst the Ewoks.

In a very classic comic book like moment the two forces of good immediately fight only to later resolve their differences through dialog, realizing they have a common enemy in the Empire.

That begin said, even as a 9 year old I hated the Ewoks and realized they were just and excuse for George Lucas to sell a bunch more merchandise.

But... but... The cute little teddy bears were going to EAT them.

I don't know how things work in Canada, but even in Texas, we don't EAT people over a territorial dispute.

Well, they might if you get far enough into East Texas.

This post reminds me of the whole death star/contractors dialouge in Clerks.

How disappointing to be compared to the Smith/Clerks oeuvre.

Now I hardly feel the post was worth it.

I'm not sure that eating creatures of another race makes you evil (especially trespassing interlopers). On Farscape, John Crichton was kind of shocked when the rest of the crew barbecued and consumed one of the sentient aliens that had been trying to destroy them previously in the episode, but I seem to remember that he eventually realized that humans were in the minority in considering this practice to be abhorrent.

Let's see what you say about that sentiment when the Armadillo People of the planet Gruqqo IV land and decide the members of the Mono E look delicious.

Well, at least then we'll have fans of SOME kind.

But I think that the creatures that you consume have to be some sort of evildoers, enemies, or criminals, at the very least.

I can only assume if they ate Jedi et al, that it would have looked like the scene in Gremlins when they consumed the plate of cold chicken. "yum yum!"