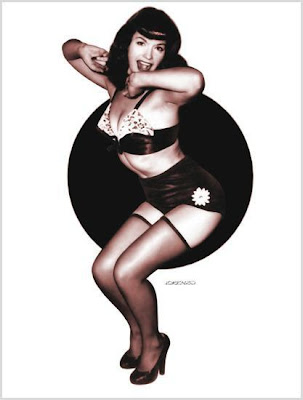 Even if you didn't know her name, it's most likely you knew the face (etc...) of Bettie Page.

Ms. Page was a pin-up model of the 1950's, who occasionally posed not just for standard cheesecake faire, but also for some racier and edgier material that became a hot item among collectors. Page gained notoriety as she appeared in Playboy and eventually found herself subpoenaed to testify on the adult publication industry of the 1950's (congressmen were really into making a name for themselves in the 50's by calling hearings for all sorts of cultural/ moral issues which appealed to the easily outraged).

Much of Page's mystique springs from how the model basically quit the biz and disappeared off the cultural map for decades, leaving behind a look as iconic as Louise Brooks, or even her contemporaries such as Marilyn Monroe (or Harlow or Mansfield).

Oddly, there is a comics-bent to all this as Dave Stevens (who died in March), creator of the Rocketeer, was semi-obsessed with Page, using her as a model in his work. Jennifer Connolly would go on to play the role Stevens had modeled after Page in the Disney movie of The Rocketeer (which I love. You should rent it). Stevens eventually tracked down Page, who was apparently unaware of her cult status, and who chose not to be photographed so her fans would remember her as the smiling face they knew, forever young.

The 1990's and 00's saw a resurgence of Page collectibles, merchandise, and rock-a-billy chicks took on Page's look. Quite the cultural footprint for someone who was never a movie star, what-have-you.

Sadly, Ms. Page passed away this week at age 85. While her body and spirit have joined with the infinite, she has left an eternal legacy of people pausing longer than necessary when they stumble upon her photographs.

We love you, Bettie. You'll be missed. 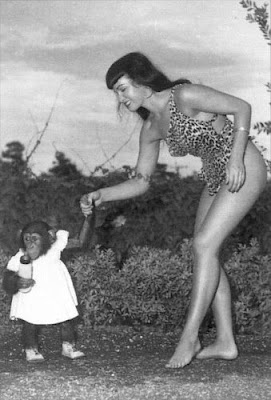 Page starred in a few mainstream movies too, didn't she?

I don't believe she did, but that all depends upon your definition of "mainstream".

I consider IMDB as definitive a source for this sort of thing as you'll find, and the movies listed include "Striporama", "Teaserama", and "Teaser Girl in High Heels". All sound appealing, but probably weren't playing The Vista on Main Street in 1953.

We saw the movie "The Notorious Bettie Page" with Gretchen Mol.... it's pretty good. Nice use of B&W and color in different parts of the film, too.