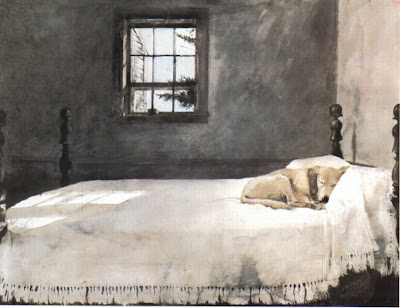 Andrew Wyeth has merged with the infinite.

The picture above is called "Master Bedroom" and has followed me from bedroom to bedroom for about 12 - 13 years. And I suppose it probably always will.

What a great picture. I can understand why it spoke to you. It makes me think where ever my dog is, that is home.

My dad has this hanging in my childhood bedroom redecorated from when last I lived there from Ministry and Steve Vai posters to Wyeth.

How can you replace Steve Vai? I don't understand why you're dad wouldn't want to maintain such a classic look to a room?

Unfortunately Steve Vai does not jive so well with a nautical theme, or stuffed fish throw pillows.

I sort of think of Steve Vai as such a classic that eh works in any theme. Santa Fe. Retro kitsch. Colonial. He really fits in everywhere.

I find that picture sort of vaguely depressing for some reason. I mean, there's a dog and all, but the room itself and even the window feel really bleak to me.

I find it calming. Yes, the room is farmhouse spartan, but that's a dog contentedly sleeping on his family's pillow. And as someone who regularly sees his own little lab in the sam spot, it's sort of pleasing.

I am not ready to get into a full breakdown of the image, and discussion of form, space, whatever... And I can see your point. But perhaps next time you're here we can see the print in a larger size and perhaps it will feel a bit different.

Count me in as another leaguer who has that print above the master bed. So much for me being a unique little snowflake, geez...

I'm ashamed to say that when I saw this story I thought "Wait, that dude was still alive?" Somehow my Art-History defective brain had him lumped in with Winslow Homer and that era.

But house is gray and gloomy, and doggy has been left all alone....

Not too lonely. Helga is in the next room.