I was looking at the box of Arm & Hammer cat litter that we keep for Jeff, and it struck me how odd the pictures they put on cat products are when they choose to use photos. Cats just don't photo terribly well. Add in the fact that when cats ARE happy, they don't usually have a facial expression or body language to alert you to the fact that would be photographable. So on all cat products, they kind of depend on just getting photos of cats with piqued attention. Ie: they take pics of cats who are in hunting mode. Or, cats who are thinking of destroying/ killing/ maiming something.

And that's a little weird.

EDIT: here's some cat imagery that hopefully Jason will enjoy. 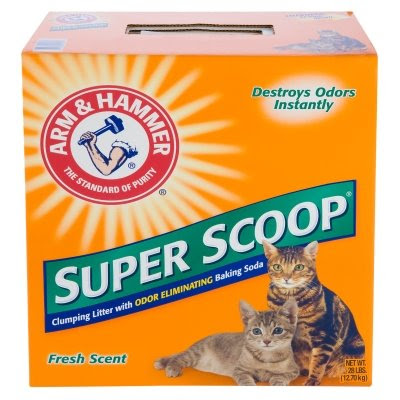 The only thing on their minds is murder. 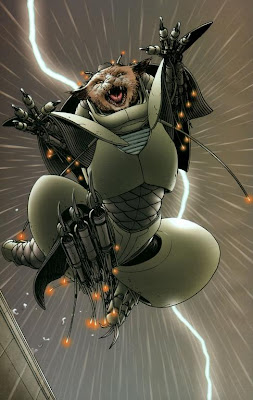 Jeff the Cat as imagined by Frank Quitely (from We3) 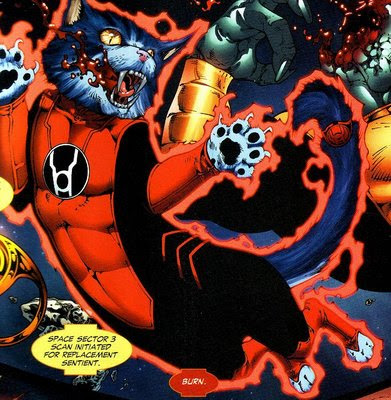 Red Lantern Kitty (from: Rage of the Red Lanterns)


Li'l Leaguers: Kid wins contest to be in Superman book by Stone Arch

I mentioned a while back that Stone Arch Books is publishing kids reader books featuring Superman (which you should BUY so your kids will grow up as right-minded people). Well, I particularly dig this deal.

They had a contest to write about a hero at their school, and the winner was placed into a story with Superman. Pretty cool stuff. Read more here.

Tip of the hat to Superman Homepage.

Went over to Vivo tonight (off Manor) to have dinner with League-Pal Julia. Julia and I worked together at Enspire, sharing offices upon occasion (it was sort of tradition for producers at Enspire to change offices every few months), and becoming lunch buddies and outside-of-work buddies.

Julia's pretty smart (she went to MIT), but not smart enough to not be my pal, so this evening, we raised a glass or two for JEP. I don't think she actually reads LoM, but if she did, I'd say "Happy Birthday, Julia Goolia".

Also, I always forget about Vivo, but its really pretty good. I'm partial to it.

Jonathan and Billie were there, too, for Leaguers who want to track their movements.

Who Wants to Websling Down the Great, White Way?

Nathan sent this along. It's an announcement about auditions for the upcoming Spider-Man Musical with music by Bono and The Edge. Click on the block about "Casting Calls".

Apparently, they're casting in Austin. Which only makes sense. The producers obviously were looking for me to shave my head and play Wilson Fisk, the Kingpin. Because I look @#$%ing GOOD in a purple ascot.


Countdown to the Land of the Ice and Snow

As a reminder, Sunday I board a plane for Minneapolis. For Leaguers looking to party down with a bunch of Library professionals, have I got a place for YOU.

I'm happy to go. Sadder that its conflicting with what was supposed to be my birthday present (enjoy that ticket to Springsteen, Reed-o). But if my birthday plans weren't completely screwed, it wouldn't be my birthday. Although, on reflection, last year went well. Its just been pretty much every other single birthday since I turned 17 that's been lackluster.

Ah, well. Once every decade and a half is pretty good, I guess.

I would much rather be in Minneapolis hangin' with my bosses than seeing Springsteen rocking "Thunder Road". Yeah. Awesome. Maybe we can go to Mall of America and visit a Sbarro or something.

Anyhow, blogging may be heavy if I'm just sitting in a hotel room. But if I keep getting shanghied by the dudes who sign my paycheck, I might not blog so much. Who can say?

All I know is that it'll probably snow at night. And I'm ready for springtime.
Posted by The League at 11:18 PM

A blog post about the expressions on the faces of cats on litter box products? Are you sure your April Fool's post wasn't a day late?

Look, man... sometimes after 6 years and 3000 posts, it ain't always easy to come up with new stuff. Sometimes your musings on pictures of kitties is all you got.

I will add an edit for you.

The day Jeff the Cat gets a weaponized suit of power armor is the day I will be leaving South Austin. Everyone else would be wise to follow.

Those are some badass cats.