It's been a long while since I tried to watch "Supergirl: The Movie". I've not actually ever made it all the way through the movie, at least in one shot. Except for the last time, when I had the flu, was running a 102 fever and was drifting in and out, and wasn't sure what might have been an hallucination.

The important thing to know about Supergirl is that it was produced by the same Salkinds who produced the first three Superman movies, and largely reflects what would happen if they were left to their own devices. The movie faired poorly enough that it is rumored that its part of why DC more or less retired Kara Zor-El/ Linda Lee from the DC Comics Universe for about two decades. I don't know if I buy that story, but it didn't mean that comic dorks didn't actually TELL Supergirl star Helen Slater that somehow she was responsible for the death of Supergirl in the comics (that's not cool, ya'll).*

The movie has some curious sponsorships, such as Popeye's Chicken, A&W Rootbeer and maybe Schlitz Malt Liquor. It also features several celebrities slumming it for the fun of being in a corny superhero movie, one would assume. Peter O'Toole plays some sort of wizard of a lost Kryptonian city (Argo) that retreated to "Innerspace" when Krypton exploded. Or something. Mia Farrow appears as Allura, Supergirl's mother. And Faye Dunaway headlines as "Selena", the villainness. 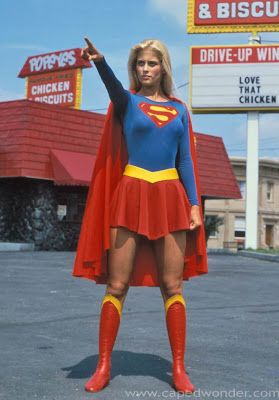 Supergirl declares that she is going to find out why the chicken bucket dinner crossed the road.

None of the stars of the original movies are in Supergirl, except for Marc McClure as Jimmy Olsen. There's some very Bronze Age-ish reason cooked up as to where Superman is during the duration of the film (he's off planet working out an alien peace treaty). Most likely Lois wasn't going to appear as Kidder wasn't getting along with the Salkinds at the time of the shooting. And... a pre-Max Headroom Matt Frewer appears as one of the first two people Supergirl meets on Earth. Who promptly attempt to rape her (it's a fun movie for kids!).

Like Superman III and IV, the writers, director and producers of the movie envisioned none of the same sense of scale or American myth-building or representation that the first two Superman films attempted to embody. The whole thing feels vaguely under-thought out and not taken very seriously for a major motion picture, but in the wake of the success of the recent era of comic movies, its easy to forget that until Tim Burton produced Batman in the late 80's, most people felt their comic book movie job was to make an episode of the old Batman TV show. 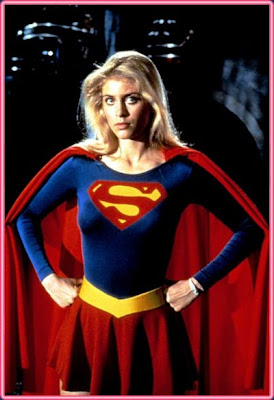 Supergirl ponders a future in which she will star in no sequels.

The people in the movie are all oddly plain looking, in an after-school special sort of way that would never happen in a movie these days.

The big-scale heroic acts of the movie include Supergirl putting out a tire fire and stopping runaway construction equipment. Which all occurs far further into the movie than you'd probably guess.

By the time the movie hit the screen (I wouldn't see it until years later, possibly on VHS... I have no real recollection), Supergirl had moved well past the demure sweet-16 year old that had first appeared in Action Comics 252. She was, by the 1970's, a sort of kick-ass undergrad who frequently got wound up about social issues of the day. The movie plays up a bit more of the "I'm a good girl" take on Supergirl, without quite the same creepy factor that a lot of the earliest Supergirl stories contained.

As the demure and reserved Kara Zor-El, Helen Slater is fine, I guess. She looks exactly right in the suit, she seems to be the only one taking things seriously, and if you were going to have that brand of Supergirl, then you could do a lot worse.**

I'm going to go ahead and say it: This is a really dumb movie. It features whole scenes in which they seemed to neglect to actually put in the big budget movie monster, a comparative scene to the "can you read my mind" sequence in which Supergirl first knocks out her paramour, then carries him around the world in a bumper car. And the central conflict seems to stem from Supergirl and Faye Dunaway both wanting the sexy lawn-guy.

In many, many ways, it makes just no sense, and fits in with the Superman mythology in only the slimmest of ways.

While normally I'd really appreciate how some folks persevere no matter what obstacles are in their path, one sort of feels that once the producers couldn't land Christopher Reeve for the movie, that should have been a sign to call the the whole thing off.

The movie has a weird, kind of goofy fantasy movie ending that makes not a lick of sense and features a detailed puppet of something that may be THE DEVIL. Ya'll, I do not understand what I just watched.


*Supergirl would become one of the internet's most fetishized objects. Her return to DC Comics circa 2005 would be marred by a costume redesign and storytelling that seemed to reflect that fetish far more than celebrating the history of the character. In the past year, writer Sterling Gates managed to rehabilitate the character, but the costume is in deep need of a redesign.

**Slater went on to feature in other movies such as "The Secret of My Success", "The Legend of Billie Jean" and much more. She recently appeared on Smallville as Lara-El, Clark's birth mother. Let us just say that she has aged rather well since she wore the cape. And, these days, I think most comic fans agree that Slater is probably the best thing about the movie and celebrate her as part of the whole weird, mixed-up world of Super-fandom. She appears at signings, etc...
Posted by The League at 11:28 PM

Message in spanish from Bogota, Colombia: