So I don't know why I hadn't thought much about it until last week, but I suddenly realized I was going to MC the conference I was "running" this week. So I more or less spent the past day and a half intro-ing all kinds of presentations.

Luckily, my team is super-awesome, so I was able to let them handle the administrative stuff this week while I wore a tie and ran around hoping nothing went wrong.

That's more or less over now, so now tomorrow is making sure I follow up with everyone who wanted to chat.

I guess we'll be doing this again next year.


I know how Ray feels 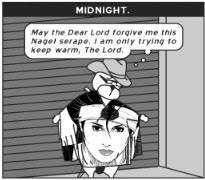 Not Clear on the Concept

ABC is creating a sort of future-looking faux-documentary that portrays Spaceship Earth in the year 2100. Probably to save money, ABC has employed Flash cartoons.

In an attempt to be hip/ edgy/ what-have-you, they're describing what they did as a graphic novel. See here.

I find it hard to believe that nobody at ABC knew that a cartoon isn't the same thing as a graphic novel, and I think if they didn't think that the term carried some sort of cache of legitimacy vis-a-vis some mistaken notion regarding "grittiness", they would have... not done that.

The term "Graphic Novel" is largely considered to have been coined by master of the comics medium, Will Eisner, when he began putting out his first long-form work, such as "A Contract With God". Yes, it was intended to add legitimacy to work in a medium usually considered to be for children and the illiterate. Eisner was by no means alone in his efforts, but I'd focus on him here as what ABC has missed that Eisner knew, that the comic page/ sequential art is not the same thing as the animated program or the cut between scenes in film or video. It is its own medium with its own tools for expression.

A graphic novel is a complete comic work (often with multiple chapters) told with a beginning, middle and end. It is, basically, a novel in the sequential art form. And that basically means a series of static images, in which multiple actions are understood to occur in a single panel, or it may capture a single moment in linear or non-linear time. The space between panels (and this is the difference between comics and cartoons) is part of the storytelling, as the reader fills in the space or makes connections between the panels on their own. It isn't moving pictures with voice over and music.

A comic (or graphic novel) is not, ABC, a cartoon. Nor is it, WB, a Motion Comic.

I understand the impulse, but I don't call your TV shows "a moving picture" or "talking painting" or "acted out book". So, you know... just try a little harder.

It looks neat, though. Depressing, but worth checking out.

Seriously. At least the Spelling Bee is on. And at this stage, how bad can you feel for the kids who lose? They're at the nationals for, chrissake.

So... The KareBear is off to Kenya. She's with a church group, and they're going to be fitting people with glasses.

No, I have no idea how it works, but there you go.

I'm incredibly proud of KareBear as she's wanted to take part in some sort of mission work since high school. Sure, it could be argued that she's more than fulfilled that goal in her own backyard, but I think this was a particularly specific way she wanted to do it.

Most impressive is that she's decided to do it alone. The Admiral and KareBear are two peas in a pod, so I was a bit skeptical about how this would work if The Admiral remained at base, but so far, so good.

Wishing her the best of luck.
Posted by The League at 6:48 PM

Hold on there, cowboy...

If Watchmen isn't a Graphic Novel due to its initial serialized publication, does that mean David Copperfield isn't really a novel? If so, what is it?

David Copperfield isn't a novel because he is a magician. So magic is involved. Keep up, Fantomenos!

Nah, I more or less consider Watchmen to be a graphic novel now. Moore certainly intended for the story to have a beginning, middle and end, and to stand alone. So, point taken. But I wouldn't have described the book that was during its initial publication. Its been in the intervening years that people look at it as a single volume and WB Books applied "graphic novel" to the spine that its fallen into that category by default.

But, sure, yeah. bad example. I agree with you completely.

I'm so glad you agree, and even gladder that you took a swing at the Copperfield pun I teed up so nicely.

I love this place!