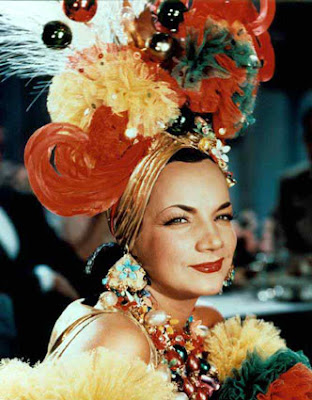 Why don't we have entertainers anymore like Carmen Miranda? She's attractive, can sing and has a wide variety of fascinating hats.

I guess we got too fancy for the likes of Carmen Miranda and her hats, what with our rock'n'roll, internets and whatnot. But how can you not like Ms. Miranda? At one point, she was considered to be quite the bees knees. She was, after all, lampooned by Bugs Bunny and was in a great number of films, representing what was considered to be the fun times to be had with our neighbors to the south (Miranda was actually Brazilian).

You Shall Die By Your Own Evil Creation

It is too late. I am going to start an indie band just to name my second album after this new book (I keep pitching the band name "The Invincible Monster Men" to Jason, but he isn't biting). You can not use that name for your album (or band).

Anyhow, the first book (both collect the works of forgotten comic artist Fletcher Hanks) was pretty much mind-bending.

One issue that many comic geeks like myself have is that new stuff is but a photocopy of a photocopy, that we're so familiar with convention as fans, and fans as artists and writers, that its easy to argue that the wild creativity that fueled the engine of the creation of the superhero genre has been mostly lost. Imagine being at the start of a genre where there really aren't many rules yet, and you only kind of care, but you have to turn in pages... Anyway, its a wild, unmanaged sort of creativity that's being discovered here in in the 21st Century after being almost completely forgotten for 65 years-ish. 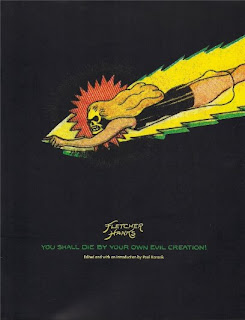 I strongly suspect its what so many of us love about Kirby's-latter-career stuff. The guy was so unselfconscious and was able to spin out a mind-bending story as someone who had helped build the medium, so he might as well continue to define it (and he did).

Sadly, Fletcher Hanks disappeared out of comics relatively quickly, and had a fairly rough life.

I don't know exactly why Hanks' stuff works for me, but it does.

Was clocking a 26% at Rottentomatoes.com at last check.

Is it possible someone noticed that Bay can not direct actors or action sequences, comedy or drama? And that you can't really tell what's happening in the big-ticket action scenes?

Or is it just the case that in a sequel, once the shine of the original is off, that we sort of need a story this time around?

Best of luck to the GI Joe movie.

Best of Luck to South Carolina

Do you have any idea how much I wish my governor would go missing?
Posted by The League at 9:32 PM

My favorite moment (as in, stupid moment) from the first is where they are in the desolate desert and are trying to think where to go for "saftey".

Down to 21% now. I don't even know if the Rifftrax guys will touch this one... but I hope they do.