The Horror, The Horror (Movies)

I know, I know... it's two months until Halloween. But as League HQ will be throwing a Halloween party this year (we are! Be here after 8:00 on 10/31) I am trying to handle the cost by purchasing a few decorations early online, and last night I received a box with some stuff that should help set the appropriately cheesy/terrifying tone.*

And then Caffeinated Joe posted this gem, which I know more than a few Leaguers should be able to enjoy.

I sort of suspect Caffeinated Joe is in the Halloween Spirit all-year round.

I'm thinking ahead a bit, as last year I was a bit distracted by ending a job and starting a new job, etc... and just didn't really bother too much with the whole Halloween business. In fact, had Team Roth/ Harms not shown up spontaneously, I would have probably been in bed by 10:00.

When Jamie and I first moved in together, starting in October, I'd start watching horror movies as often as possible. Eventually we dwindled off the practice. Jamie's tolerance for horror is pretty low, and my own tastes for horror are fairly narrow.

Give me a good black and white movie with Karloff, but do not expect me to sit for "Hostel". I've seen James Whale's 1931 version of "Frankenstein" a dozen times, but I don't remember the last time I went to the theater to see a "horror" movie.

Its probably part of why I keep schilling for this Wolfman movie that's never actually going to arrive. I understand why people like a good slasher flick, but I also like the 3 types of monsters embodied by the classic trinity of Dracula, Wolfman and Frankenstein's monster.

1) Dracula - The Monster who walks as a man. These days, vampires are seen largely as dangerous, sexy women or men. Or, if you're any number of the women in my family, as sparkly eternal-teen-agers with super powers.

But Dracula represents the hidden danger of a monster who wears the face of the gentleman but who, frankly, wants to drink your blood and maybe taint your eternal soul. That's some creepy stuff. 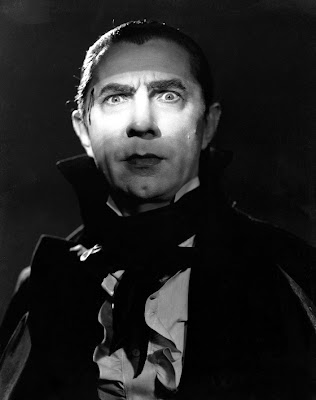 2) Wolfman - The man who is helplessly becoming a monster. The horror is just as much for the Wolfman as it is for the folks he winds up turning into dinner. 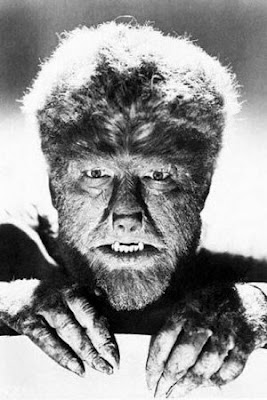 3) Frankenstein's Monster - The unwanted side effect... OF SCIENCE (and man's hubris). Probably the most replicated of the horror and science-fiction concepts, Mary Shelley's Frankenstein was dubbed "The Modern Prometheus" for a reason. We tend to think only of the lumbering, inarticulate Karloff creation of the first film, but both the film series and book know the horror belonged in equal parts to a monster brought unwanted into creation and the guy whose hubris led to his own ruination. 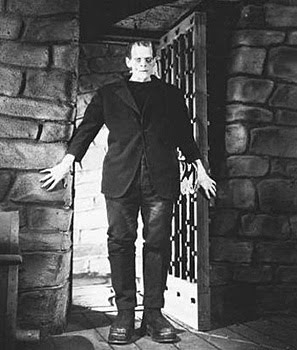 It doesn't mean I don't want to see Jamie Lee Curtis do battle with a dude in a bleached out Shatner mask. Or Bruce Campbell take on the Evil Dead. And I've gone on record that I still believe that the original version of "The Haunting" is the most genuinely scary movie I've seen (because that @#$% can happen, man). The occasional zombie movie, of course. Or Julie Adams in "Creature from the Black Lagoon". Hubba Hubba.**

And I would like for someone to finally create a "Legend of Sleepy Hollow" movie half as scary as I found the cartoon when I was 7.

While I understand the visceral appeal of something like "Funny Games", it feels a bit more like a trick. If my movie has a scene where a villain is shooting puppies, of course its going to be fairly horrible, but so what? Its just horrible. That's not a good story so much as telling the audience that you can dream up ways to make them uncomfortable. I think I get enough of that sort of thing from the paper.

So as autumn falls, I'm going to be putting together a movie-watching schedule. If you have suggestions, or want to have a "Film Club", let me know.

(ed. note: It IS a Halloween kind of day. Leaving Subway with my Black Forest Ham sandwich, KMFA was playing "Night on Bald Mountain".)

*As I was writing this, Jamie came down the stairs with my old lab coat I wore a Halloween or two. It's just a very Halloween sort of day...

**or my girl Elsa Lanchester from the Bride movie. She knew how to work a fright wig and medical gauze.
Posted by The League at 11:09 AM

First off, thanks for the reblog! It is a great mash-up, isn't it?

And yeah, I am always in a semi-Halloween vibe. Love the season, love horror movies, love the 'scary stuff'. October is just the most awesome month.

And I am with you on the types of horror flicks. I love the old stuff, can watch again and again. But I also have a jones for the old, new stuff, like Carpenter's "Halloween" and such.

The new, uber-violent, gory stuff? Not so much. Zombie's "Halloween" was the exact opposite of what I liked about the original.

Ah well, I guess times keep changing for everyone. Someday, someone is gonna be reminscing about "Hostel" and "Saw", I suppose.

Anyway... Hope you have an AWESOME Halloween season, indeed!

There are plenty of wonderful spook shows in recent years. Check out "The Others", "The Mist" and "Drag Me to Hell". Based on his DVD commentaries, I actually think that Eli Roth has a good horror film in him, we've just yet to see it.

Nice recap of the classics!

My father is a mild mannered man. Nothing unusual, you'd think. But lurking under his cherubic demenor is a love of the Universal Monsters (as you've just shown). I like them all the more because of that.