Well, this is easier than coming up with new, original content. Its time for another meme.

1. Who was your FIRST date?

Miss Shauna Cross, she of the "Whip It" feature film.

I was 14, KareBear drove us to the Showplace 6, and we saw the Kris Kristofferson/ Cheryl Ladd Sci-Fi epic, "Millennium". I had no idea what I was doing, or, pretty clearly, I wouldn't have pitched "Millennium". More than likely, I probably tried to make her pay for herself. I don't remember.

I do recall Jason and his pals thought it was hilarious that I was having the KareBear drive me around on dates. But it seemed uncool to make her sit on the handlebars of my Schwinn.

Also, I had a date and they did not.

Shauna was one of the first girls I ever met who could dish it out as well as take it, and at 14 or 15, that's a rare commodity. We went to Homecoming a few weeks later, and then I don't know what... I honestly have no recollection. But obviously it wasn't too traumatic as we remain chummy to this day. And that, Leaguers, was almost exactly 20 years ago.

2. Do you still talk to your FIRST love?

Uhhhhh... I don't know how to answer this question. Sure.


3. What was your FIRST alcoholic drink?

The Admiral, being a wise man, gave me a taste of his beer when I was five. I was a grabby, persistent kid, and since The Admiral seemed to enjoy having a cold can of Miller when he was cooking up some burgers. He must have decided to cut this off quickly and let me have a sip so he could just have a beer in peace. Can't blame a man works hard for a living when he shuts a kid down.

He must have known exactly what was going to happen, because I was completely horrified and didn't touch beer again until I was up to no good years and years later.

The first drink I ordered and finished was a margarita ordered at a restaurant in Cozumel called "The Fat Grouper" at 14 or 15. I was sort of non-plussed. And also under parental supervision.

4. What was your FIRST job?

The much discussed gig at Chuck E. Cheese.

As of this posting, the 6th hit one gets on Google when you search for "working at Chuck E. Cheese".

5. What was your FIRST car?

A 1983 red and maroon Honda Accord. 4 cylinders of justice, no power steering, and, in the end, no AC, either. The name was given to the car when we decided that it was "dangerous when cornered". It was a great little car. 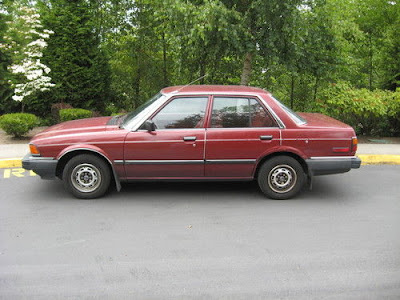 Not "The Badger", but more or less the same thing

I loved that car the way you love a dog or cat, and had the cost of repairing the car not become a bit crazy, I would have gladly driven it for a lot longer.

6. Where did you go on your FIRST ride on an airplane?

I have no idea. My guess would be Marquette, Michigan from Dallas, Texas. But I don't know. It may have been from Michigan to Florida, too.

7. Who was your FIRST best friend & do you still talk?

We moved around a lot as kids. I don't know if I have any idea who my first best friend was. The answer is probably no.

8. Whose wedding did you attend the FIRST time?

My mother's sister, passed before I was born. Her husband, my Uncle D, re-married when I was little enough that I remember looking around in wonder at all the people in sport coats at the wedding. From about 3' high. I remember knowing the event wasn't aimed at kids, because people kept standing up, and then I couldn't see.

9. Tell us about your FIRST roommate.

Peabo and I had been buddies since 4th grade, when I moved to Austin, so maybe that answers that "best friend" question.

Anyway, we were terrible roommates. We'd known each other too long to try to be polite from day 1. I was messy, loud, constantly making coffee. He listened to Billy Joel's Greatest Hits on repeat for an entire semester.

We're still pals, and I don't recall more than a few arguments, but we wisely decided to be pals and not roommates when it came time to re-up. And because of that, we're still talking to one another today.

That was also the year that Peabo BECAME Peabo. Because, as we sat watching TV one evening, Peabo Bryson was on, and thinking out loud, my roommate said "I wish I had a cool name like PEABO. Peeeee-boh."

10. If you had one wish, what would it be (other than more wishes)?

An end to disease sounds great in theory, but I suspect that we'd create more problems than solve them all. An end to want?

11. What is something you would learn if you had the chance?

How is this a "first?" This meme has gone off the rails.

Fine. I'd learn Spanish. I don't know what half the people are saying 90% of the time.

Or else I'd learn accordian, because that would be awesome.

12. Did you marry the FIRST person you were in love with?

Sure. Dude, these memes are trouble.

13. What were the first lessons you ever took and why?

Tumbling. Man, I have no idea. Don't all kids take tumbling?


14. What is the first thing you do when you get home?

Get assaulted by lovely dogs, put down my computer bag, say hello to the cat, find Jamie, get some smoochies, and say "How was your day?"

It's not a bad thing to come home to, I tell you.

Wait...What the heck is Peabo's real name? I thought it was Peabo!

One day soon, you will have to explain to Emily "why you hate your cat so much".

Sadly, Peabo's name must be withheld to protect the innocent.

How do I hate my cat? I love that cat. He sleeps 6 inches from my head all night. But he's also smart enough not to get between the door and hyper dogs when I walk in the door.

I don't think you hate JTC. Emily just gets the impression he's a second class member of LoM.

Jeff is lucky to be alive, given his kittenhood and tendency to bite incessantly.

But, no, Jeff is much loved.

He just doesn't do much to generate ink. He's a very low maintenance cat.

Tumbling is important because it teaches you how to spring back up when you fall down. That's an important lesson for kids. Even moreso for adults.