It's been a pretty lousy summer for movies.

In the wake of the superhero and teenaged wizard tentpole summers, Hollywood has once again misconstrued the obvious (people like movies that aren't stupid) and has now transmorgified the evidence to suggest that no movie should exist unless based upon an existing property, be it old movie, TV show, novel, comic book, back of a Wheaties box, etc...

I consider myself exactly the target audience for a summer movie. But perhaps now that I'm a male on the far end of the 18-35 age bracket, that's no longer so. I did not see:

I also did not see: Moon, 500 Days of Summer, and a few others I'd consider seeing. I get out to the movies far less frequently, and find trips anywhere but The Alamo to be sort of nightmarish, so... Hollywood can count me as a casualty. I am not helping them.

And I do still want to see "Julie & Julia", "Zombieland", and "Inglourious Basterds". And Maybe "Ponyo", if the mood strikes me.

One movie that did not appear to be based on a toy, book, cartoon, or bar of soap had some trailer at The Alamo this spring. I'd also seen the posters for "District 9", and was pleased to see director/ producer Peter Jackson's name attached. I saw "Dead Alive" in the theater, thank you. And later, much to Jason's chagrin, "Meet the Feebles". Jackson was "presenting" District 9, and I figured even if all he was doingw as distributing the movie, it was worth a look-see. 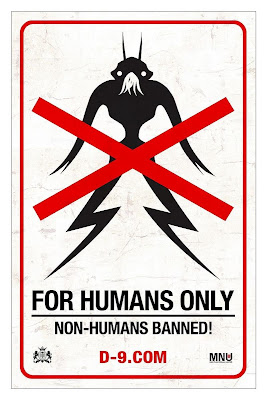 if only this poster had existed for my bedroom in high school...

And then, not so long ago, JimD called me from his mountaintop lodge to instruct me to see the movie. So, of course, I did so.

It is not that the plot for District 9 isn't something that feels familiar from other films. Most definitely, there are elements of other sci-fi films and just other movies in general. And sort of like when I saw "The Host" a few summers back, I was anticipating that the twist of the film would have less to do with the plot than the filter of the film's country of origin. And in many way, that's true.

But where I felt that "The Host" simply didn't wind up telling a very compelling story (and there are some interesting parallels between "The Host" and "District 9" in regards to those in power, and a few other plotpoints I don't wish to spoil), I felt "District 9" told an engaging story, and absolutely did not skimp on action.

The story hinges largely upon the likely fallout if an alien species arrived in much the same manner of immigrants as we get reports of here in the US, but which is an uncommon practice as of the mid-20th Century. These are a labor class of immigrant, uneducated, inarticulate, and because they are unplanned visitors, the government of South Africa sets up a minimum standard of living and then all but abandons them to their slums. The slums, making the occupants of Johannesburg nervous, are to be leveled and the "Prawn" moved to a new location. 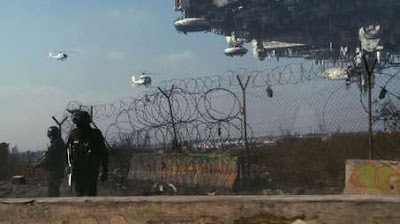 And here our troubles begin.

One sign of what we would have called in my college days "a foreign film", was usually that, in particular, FX were half-baked and were often more or a stage prop the audience had to use their willing suspension of disbelief to enjoy. The FX of "District 9" were absolutely phenomenal, with seamless CG and human interaction. If and when puppets were used for the film, I wouldn't have known.

Adding to the challenge is that much of the film is constructed to appear as if its part of a documentary and includes a large portion of "found footage". Shots are handheld, lighting uneven, etc... and it all still looks remarkable and seamless.

The DP, FX team and director wisely place the enormous alien mothership in many shots, simply floating over the city as something matter-of-fact, that the residents don't even look up at any more, its been there so long. Its a bizarre but necessary detail to the framing of the story.

The story movies at a rapid clip, and I give credit to both lead actor Sharlto Copley (this is, bizarrely, his only acting work to date) and the FX crew for still being able to develop the characters of Wikus and Christopher.

The world writer/ director Neill Blomkamp has created feels remarkably likely, much more so than what I'd consider to be District 9's American counter-part, "Alien Nation", which basically just boiled things down to a new, slightly unknown ethnic class living in the US. The very alienness of two cultures creates massive disturbance, and its not hard to believe that locals probably would want to resettle the "Prawn" out of their city, no matter how open minded. 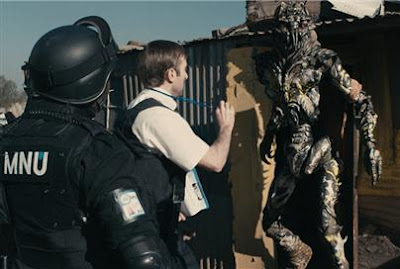 But I did wonder, occasionally, what I might be missing allegorically from Blomkamp's perspective as a South African. Clearly the slum conditions and co-habitation of South Africans plays out in the movie, but it seems I might have missed some other elements.

From the set-up, the story does, as I mentioned, take a familiar turn, but I don't think its anything that feels overly contrived. Its well-structured. And if you're just looking for an action movie, here you go.

I should mention: The movie is rated "R" for a reason. Don't worry about seeing a boob or anything, but Blomkamp also doesn't shy away from finding new and inventive ways to demonstrate alien technology.

Anyhow, in an otherwise mostly disappointing summer (now I wait another year for Iron Man 2? Booooooooo), I recommend checking out "District 9".

If I were the producer's of NBC's new version of "V", I'd be very concerned right now.

I too gave this a big thumbs up. It starts in a familiar horror/romp action pattern and goes into an unexpected Hitchcock thriller pattern.

I'm sorry. Randy, did you have a question?

I really, really loved this movie. My team went out and saw it as a team building exercise. After it we all had to go for a beer to discuss.

This was just a great piece of sci-fi writing. Of course it is allegorical to the treatment of Africans in South Africa but there are also great parallels to other "real world" events. Like the MNU security force being Blackwater and some of the lab scenes begging the comparison to the Iraqi torture debacle.

This is a show that is definitely worth seeing!

Yeah, I think I harped a bit too much about my concerns regarding not being able to get all of the allegories, but I did get the big ones like MNU and certainly South Africa's history of apartheid and segregation.

What I was wondering was: how many of the details would South Africans "get" that I totally missed? Maybe some details?

Yeah, I'm sure there are a ton of things I missed as well. One thing I did notice was the state of the aliens when the landed on Earth as they were malnourished. This is the same state that many slaves arrived in on the shores of the USA.

Right, I was certainly thinking of that, as well as how now many sub-Saharan Africans are now coming into S. Africa looking for work, etc... and the state of affairs as they arrive.

Which is where I wasn't sure exactly where the S. African-ness of the film started my reading as an American ended. Absolutely you could see it as the equivalent as either slave ship, or boatloads of Irish immigrants circa 1860, or whatever in the US. Few arrived in luxury or because they couldn't stand it because their lives were so charmed overseas.

Anyhow, I'd be more than curious to hear the director's commentary.

Here is a good primer on South African xenophobia from Tor.com.