Someone let me come over and play on your X-Box

Back in high school I picked up a Batman original graphic novel called "Arkham Asylum: A Serious House on Serious Earth" that, honestly, freaked me out as I was reading it. 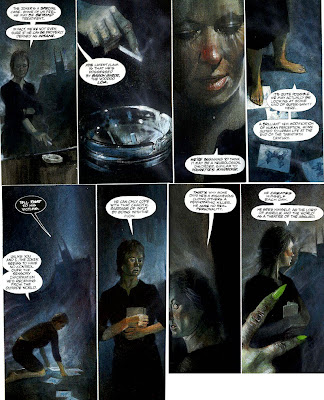 The concept of Arkham Asylum had always been a creepy one (a madhouse jail full of Batman's lunatic villains), but this writer guy I hadn't heard of (Grant Morrison) took the idea and amped it up to 11.

As with many other standalone projects (The Killing Joke, Dark Knight, etc..), the series did have an impact upon the mainline books, not just in informing the history of Arkham, and the terrifying atmosphere, but in taking the psychosis of the villains as something truly unsettling.

Add in the mixed media of Dave McKean, and you have a unique comic experience on your hands.

Anyhow, its worth reading at some point if you haven't taken a look.

I don't believe the new videogame of Arkham Asylum is based directly upon the comic, but it does revolve around a riot at Arkham, and it does seem they didn't steer away from the comic, either. It's got the comic's look, to an extent.

But clips seem to indicate a Batman game that focuses on "What Would Batman Do?" over just Kung-Foolery and stunts. Looks like its got some interesting strategy, etc...

But I'm also not really planning on buying an X-Box, so its all moot for me.

Unless, of course, you own an X-Box, were planning to buy the game and have a little mercy on your good friend The League and maybe invite him over. He can bring pretzels.

Thanks to Shoemaker for the link
Posted by The League at 9:32 PM

The Penny-Arcade guys gave it a good review, that's good enough for me.

That game looks amazing. Like a Batman-based Zelda game.

If you want to rent it or something, we can definitely give it a try over here (I might buy it, but probably not until it's been out awhile and the price drops- I just pretty much do that on all the games I buy).

I can certainly wait for either option. But this game looks pretty keen.