My co-worker, Dan, recently informed me of something that I really want to start working into my Holiday season.

Apparently in Germany there used to be a tradition in early December that, in order to get little kids to behave in the Holiday seasons operated on the "more stick, less carrot" model. Germans, being Germans, had cooked up a surefire way of managing their kids by scaring the bejeezus out of bad kids with a fellow named Krampus (complete with horns, fangs, etc...) who came by in early December with Santa to warn little bad kids about how rotten they were, and apparently rattle chains and pop them with birch branches.

I'm not clear if an early December birch-thwacking was it for the kids, and if they still got apples in their shoes on December 25th or whatever the little stone age German kids used to get for Christmas, but I think we could work something out if we wanted to bring Krampus into the modern American Christmas. 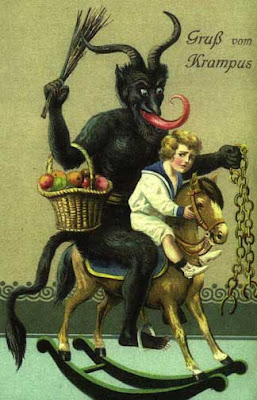 Wouldn't this look awesome as an inflatable lawn decoration?

I like the idea that Santa and this Krampus guy can operate on a good cop/ bad cop model in a way that kids can wrap their heads around. It certainly puts a whole new spin on Santa when you consider that he seems to endorse Krampus's @#$%ed-up shenanigans.

Anyway, I guess in some parts of Alpine Germany, people still do this Krampus thing. 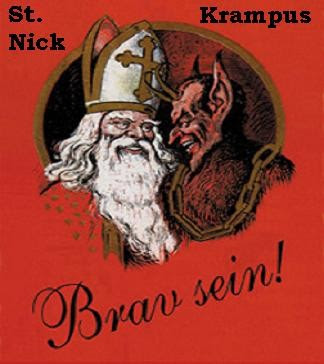 You know St. Nick thinks its totally hilarious to have a jack-ass side kick who makes those ungrateful little miscreants sweat a little

Oh, Germany. You are a font of never-ending old-school terror.
Posted by The League at 9:51 PM

I need Krampus at the house on occasion. Like in the morning, to make the kids get dressed.

I think we should start some sort of group to promote the re-embracing of Krampus. I think it's something that this country can get behind during these trying times.

I might just be proactive about this by donning a devil suit and hitting random kids with birch branches while informing them they aren't getting any presents this year.

When you get the devil suit and head-out, let me know so I can videotape the results!

I'm envisioning a new use for the Santor in your garage...