Every week Jamie watches "So You Think You Can Dance?", the American Idol of dance shows. Despite the fact I found lots of American Idol chatter in my early posts, I've not watched the show since the second season or so, and I don't normally watch reality competitions.

I have no real knowledge of dance other than that I grew up in a household where it wasn't considered strange to go to musicals or watch them as movies. So I really have no idea if what I'm looking at is any good or not. The style is hardly Gene Kelly or Cyd Charisse in most dances, but I don't find it as embarrassing as I find the typical, hackey cover of a Queen song on American Idol (it does not matter who you are. You aren't Freddy, so stop it.).

This week has been very busy. My office Admin is out, so I'm doing parts of her job and trying to do my own. Today a major screw-up was uncovered, and so I spent the middle of my day sweating bullets around whether or not I was going to be able to fix that situation (it resolved itself imperfectly).

Its also been a week of announcements for DC Comics. Little things most of you guys won't care too much about, I guess. But stuff I believe is healthy for comics with one foot in the past and an eye on the future. 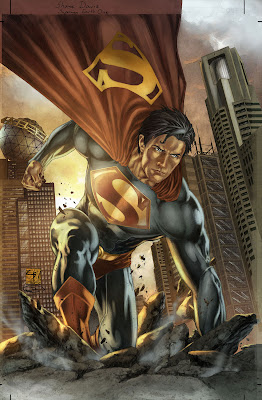 Mostly, I'm kind of tired. Which is why I don't think I have it in me this evening to say a whole lot. 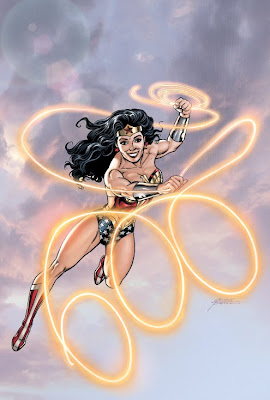 An upcoming cover for Wonder Woman #600. New George Perez art!
Posted by The League at 9:08 PM

Why must Superman always be so determined to destroy the infrastructure of American cities?

You need to borrow my copy of Irredeemable.

Earth One initiative's success is going to be very dependant on pricing. No one except the direct market folks are going to buy a sewn-binded DC hardcover.

I completely agree. I would expect DC will do the hardcover for DC loyalist types (read: me), and then release the paperbacks to mass market.

JMS also said the comic will run about 100+ pages. I would expect about a $12 price point for that sort of item in paperback if they expect to make it work.