It's the end of one of the most tumultuous years in League history. Apparently, like a lot of other people, I've decided NOT to do an exhaustive Best of 2006 list. Honestly, this year has been so nuts, and I've been so pre-occupied since mid-June, I don't feel that I'm qualified to talk about movies, music, books or anything else. Life took over this year, and that means that a lot of media-review navel-gazing took a back seat to having a life. 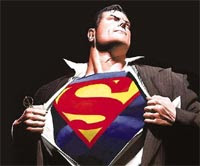 As a Superman Fan, I think it's definitely been a good year. With a new movie released (and one I enjoyed the heck out of), lots of reprints on the shelf, excellent creators on the core titles, fantastic creators on the ancillary titles, and Superman starring in a major cross-over event, two dedicated action figure lines, a great Silver Age action figure set from DC Direct, some nice DC Direct statues, lots of other new licensed product, tons of great material on DVD (from Kirk Alyn to Brandon Routh)... yeah, 2006 was a good year for The Man of Steel and his fans.

But, mostly, with the release of the Superman film, the usual Chinese Water Torture of journalists trickling out the same "Superman is Irrelevant" op-ed column completely evaporated. If Singer and Co. managed to do anything, it was remind the public of Superman's relevance.

I will always remember that moment in which I decided it was time to skip town with crystal clarity. I was sitting at my desk on a Friday afternoon, pushing some digital paperwork around for the millionth time, and thinking about how this was the same paperwork I could, potentially, be pushing around until I retired, and a little light went on in my head.

The move was a tremendous pain. As I knew it would be, it was expensive. It was risky. It was frought with complications. It was entirely worth it.

It's funny, because I DO miss friends and co-workers from the old place. I miss aspects of my old job (as The League loves it when a plan comes together). But the words "regret" or "second-thoughts" haven't popped up at all in relation to the move. No matter what issues Jamie and I have dealt with, or are continuing to deal with, it has absolutely been worth it. If anything brought that idea home, it was seeing so many friends at The League 2006 Holiday Spectacular.

I love this town.

It's avoiding the obvious not to mention the passing of Jeff Wilson, which, within our family and the circle of friends which Jeff was instrumental in establishing, has overshadowed the year. I don't know what more to say on this than was already said by folks who knew Jeff better than I ever did, and who feel the loss more acutely.

After years of hearing their names, upon arrival we met many new folks through Jason (and through Jeff), including Andy, Rami, the Blooms, JackBart and more. We've caught up with the Shaws and their addition. We've had the unique opportunity to become chummy with Steven and Lauren after years of e-mails and comment section postings. And, of course, we've reconnected with a lot of good folks in Austin.

We'll miss folks in Arizona, including my old office mates (hello OH), and some folks we met through Jamie's office. Hopefully we won't drift away until we're only exchanging Christmas cards.

We've been very lucky to see so much of Doug this year (but have a certain Kristen deficit we need to correct), are glad to be reintegrating Jason and Susan into our Austin-life, and are, of course, very happy that both sets of parents are now just a car-ride away.

Thanks, so much for a good year, everyone.