No iPhone for me

It hasn't even crossed my mind yet to get an iPhone.

It doesn't help my chances of getting an iPhone that I have a phone contract to which I'm beholden for another 18 months, and I feel I'm getting decent service. And, of course, my phone was free with my contract. The phone is the LG Chocolate, which also stores music and takes pictures. And the phone sucks, in no small part because it ALSO has a faux-touch screen capability that goes off when you stick the phone in your pocket. It likes to call whomever was the last person I intentionally dialed, a feature I can't find when I actually want it, of course. I suspect Jason gets a call at 8:00 most mornings when I'm putting keys and phone in my pocket.

I keep looking at the touch screen of the iPhone, and it's a real turn off. I ponder how scuffed the screen was on my iPod (I couldn't keep it in the protective sleeve and take it running in my arm band, so I quit using the sleeve). And how messy it looked with fingerprints all over it. I look at the iPhone and I just imagine a grease-smeared box which will keep calling Jason every time I put the damn thing in my pocket, if it will even fit. The Chocolate fits in the change pocket of my jeans. It doesn't seem the iPhone will fit in that pocket, which means at some point that glistening surface will come in contact with my keys, and that will be that.

I'm intrigued with the varying capabilities of the iPhone, but, honestly, do I really need to see the skateboarding dog YouTube video while I'm standing in line at the grocery? (That's sort of what they're pitching in the commercials for the iPhone). If I want to check e-mail, I can get the Motorola Q for a few bucks on my existing plan, or surf the web from a Treo. All without the awkwardness of tiny touchscreen buttons.

Yes, I prefer rubber buttons. There's nothing more frustrating than poking at a touchscreen that's decided it no longer wants to recognize your electrical field. 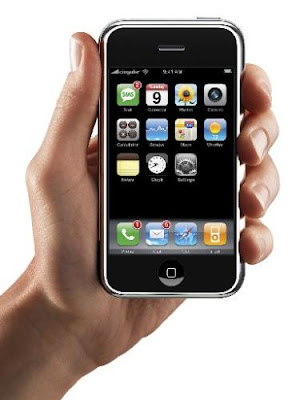 iPhone is contractually bound to use AT&T as their carrier until 2012. Not my current carrier, and so I would necessarily have to change services to a service not of my choosing for five years (most likely six as contracts usually run in two year cycles.)

Also, with the luck I've had with my iPod, I don't like the idea of losing all of my music, phone numbers and videos of skateboarding dogs should the thing decide to take the silicon-dirt-nap.

I know its totally un-hip not to salivate at the iPhone, but there's nothing in my lifestyle that makes me think that I need one. I have a free phone. I'll continue to get free phones with a series of upgraded features. Heck, in 18 months I can probably expect for my mobile provider to carry a competing product. Hopefully one lacking a touch screen interface.

Right now I get the feeling the Apple-Zombies have bought into Jobs' hype hook, line and sinker when a cost benefit analysis offers no real benefits. I was a bit appalled to hear a report last night about how plans of action are being circulated by Apple-geeks to contact the BBB, etc... with false claims regarding their cell-phone carriers so they can wrongfully be released from their contracts (hint, Apple geeks: by telling NPR's Marketplace this was your plan, you just screwed every person with a legitimate complaint out of any hope of being released from their contract for the next year).

The iPhone is sleek looking, but in that EPCOT "in the future we'll all use video-phones" sort of way. I'm just not seeing the value in this doo-hickey.


POST EDIT: I had mis-spelled Treo as "Trio". This is what happens when one does not do their research and hasn't thought too much about PDA's in a year.

I also mis-identified the carrier as Sprint. This was horribly wrong. The carrier is AT&T/ Cingular. I have no experience with AT&T or Cingular, but I have been known to get grouchy about Sprint.

I shall include my original rant, anyway, as I sort of think Sprint's customer service stinks:

Further, I have nothing nice to say about Sprint mobile service, who dealt me a list of offenses between 2000 and 2001 (including the now unheard of practice of "slamming"), and whose call center staff has the single worst customer service I've ever experienced, including dropping calls after an hour, not correcting charges after literally a dozen tries, refusing to believe I couldn't get coverage at my house in Chandler and turning off my phone on the day I was moving out of Austin thanks to their screwed up charges, which wound up with me having to pay the charges just to reinstate service so I could find my damn moving van.

On the touch-screen front... while I foresee an ocean of blue-screened gaming tables in Vegas, I can actually get my head around the practical usage for the new Microsoft touch table.

That's not to say that consumer apps will make sense quite yet, unless you're Batman, but I can visualize a couple dozen educational uses, advertising, gaming, menu's at restaurants and all kinds of Blade Runner/ Diamond Age good stuff.

iPhone is exclusive through Cingular/AT&T until 2012.

And it's Treo, not Trio.

Oh, shoot. I thought it was Sprint, but you're right. I will also fix the Trio/Treo sp.