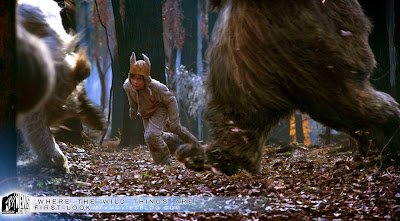 Thanks to Randy for sending this along. No, Arden has not finally escaped from Jill. Spike Jonze is making a movie of "Where the Wild Things Are".


Not much going on here. Last night Jamie and I had a lovely dinner with Lauren at Chuy's. Steven was traveling, so she came on back to League HQ and hung out for a while. She's a swell dame, and while we never did get around to firing up the Wii as planned, we still managed to stay entertained.

I'm still trying to get my head around what happened there. But I know I just saw something that tells us a whole lot about cable news... and I'm sort of afraid. Not in a "I'm being snooty" way. I'm genuinely a little freaked out by how her co-hosts and the producers reacted.

This evening Jamie met up with Amy C. and went to go see Henson's "Labyrinth" at the Dobie and I tried to clean up my office for the first time since before I got a job. It was a @#$%ing mess.

I spoke briefly with JimD (aka jmd) who had been to the first meeting of the S. Carolina Longhorns. Anyhow, apparently Jim saw there was no Texas Ex org and put one together. So, essentially, Jim just found his drinking buddies for Saturdays from August to December. Well done JimD!

I then walked the dogs, reached the farthest point in the neighborhood from the house, and it began to totally pour. Like, not a drizzle and then some rain. It was like someone turned on a shower. Mel flipped out and pulled out of his collar and leash and Lucy was straining horribly at the end of her leash.

Jamie came and tried to save us. She'd just made it home. Sadly, it was too late. I was drenched like I'd jumped in a pool with my clothes on. Hopefully my "Say No to Kryptonite!" shirt will survive.
Posted by The League at 11:01 PM

I get the feeling that what you've got there is a woman who thinks she's on Nightline and two guys who think they're on The Man Show. The wierd thing is, I kind of have sympathy for both positions (the woman for trying to have some journalistic integrity, but also the men for saying, "Oh, just get over yourself. This is just a morning news show.")

Cripes, this is when I am really, really glad I work for an NPR station.

I should save this clip and share it with people during the fund drive.

What bugs me about it is that these guys (and, most likely the producer) want for her to just play ball. It's an agreed upon sham of a story.

Now, I don't watch this show, so I'm not overly keen to the context of the program, but I certainly think that morning shows like The Today Show dilute the news to such a degree between fashion and cooking segments that the news becomes shoved in there as something to get past while they rush to the live performance by an American Idol refugee lip-synching on Rockefeller plaza.

The nervous laughing and refusal to even discuss whether or not Hilton is news (clearly her co-hosts just wanted to go to the well and just make fun of celebutantes) was what made it so creepy. It wasn't as if you thought the two men on the show were going to discuss the legitimacy of the Hilton story as news... It was fear for their jobs and a reaction to bully and humiliate (especially by the guy on the right) when the host had decided she'd make a point. Ie: You won't play ball with our corporate overlords and wish to show a hint of journalistic integrity, so we will tell our audience that the belief that our government is in upheaval might be a worthy lead story is ludicrous.

By the way, I had seen about three other clips of news shows in which hosts had specifically gone out of their way to take a stand against covering the Paris Hilton story. It's almost as if this has become the story where it's suddenly become trendy for these reporters to "take a stand" for their journalistic integrity- as if their usual coverage of American Idol results and celebrity couple breakups on any other given day is any more newsworthy. Granted, the Paris Hilton story is silly, but they're going to have to change their entire approach to what "news" is if they want to be taken seriously. The truth is that, ultimately, this is what the viewing public wants to see. I'm not sure that should be confused with what the public cares about (it may just be news as entertainment), but it's what they want to see.

By the way, what the hell qualifies sports coverages as "news"? It doesn't really have a substantial impact on anyone's life, and it's coverage of a staged, recreational activity that is meant solely to be a means of entertainment (I mean, I guess in some ways it effects the fans, but you don't see changes in the cast of the local opera reflected in the evening news). Nonetheless, we take it for granted that local sporting activity will be covered with the same attention to detail as the weather, the workings of our local justice system, or political processes (actually, coverage of sporting events is often more thorough and detailed than coverage of local politics).

I've definitely seen Daily Show montages of reporters bitching about covering Hilton, but this was the first on-air refusal. I think its a bit overly cynical to assume that anything resembling a real journalist wouldn't WANT to be part of a movement to get their networks to quit forcing them to cover the story.

Clearly profit is a motive, thus keeping viewers around so eyeballs see commercials. Hilton's story is just the tipping point in a lot of ways in regards to those American Idol results.

I just am not jaded enough yet to think that journalists wouldn't want to do better. Even in the face of what the public "wants".

Sports as news is buried at the end of the program, just as sports as news isn't usually the front page story of the paper. But, yes, sports coverage helps drive viewership/ sales as people are interested.

Sports is buried at the end of the program as long as UT isn't playing OU or A&M or so long as there isn't some other "big sports story" going on. How many times have we seen pictures on the front page of the newspaper of UT football players or coaches? It ain't real news. It's coverage of a series of events which are manufactured for entertainment purposes.

By the way, I think this lady's cohost sounded mostly just annoyed that she was acting so put upon in having to deliver this story. (After all, he was the one who told her to just move on to her second story and to not cover the Paris Hilton story if she didn't want to take responsibility for it) I also think he kind of draws attnetion to the real issue when he kind of teasingly talks about how she's acting offended as a "journalist". Are talking heads really journalists in any significant way? They don't investigate or write the news, and for all that we know, they may not even uderstand it (beyond the ability to pronounce what they're saying correctly). What gives talking head "reporters" the right to decide what's newsworthy and what isn't? Which brings me back to my hypothetical- what's to stop one of these "reporters" from refusing to report on sports or some other event that he believes to not be newsworthy? (even though he knows that a lot of his viewing audience is interested in hearing about them- like I said, you can argue that the superbowl outcome only has an entertainment value and therefore doesn't fit in among any reporting of the "real" news)

As per Sports... Locally, the UT story IS a big story when they win a National Championship. But was it the cover story for the NYT? The Washington Post? Any paper regarded as a national paper of record? Clearly local concerns are different from national or international.

If you do a quick review of the talking head in questions' bio, she's as much of a journalist as anyone else on TV these days.

In the past, the Kronkites, Dan Rathers, etc... were responsible for the content of the evening news etc... these days it seems as if there's some ceremonial effort to give that power to the talking head, but that's not really the case anymore as producers determine content of a broadcast. If the talking heads DIDN'T have that power over their own broadcast, Dan Rather wouldn't have been drummed out of his own evening news for his slip-up. Someone off camera would have been the one to go.

To get to the root of it, TV "news" DOESN'T want journalists. They want news bunnies to look pretty and read the teleprompter and maybe gab with the weather guy. Up until the last two or three years, there was an expectation that TV journalists did write their own reports, even the talking heads (they do work more than 1/2 an hour a day, after all). I believe even local talking heads do a lot of this.

I have no idea who the other two guys are, but the mocking of journalistic ethics on what is ostensibly a morning informational show (even if riddles with partisan gabbery or whatever) is telling. Clearly they don't value journalistic ethics by their mockery. The idea that someone would attempt to hold their own program to higher standards at the possible chance to lose a single ad dollar is laughable to these guys.

Clearly the past few years worth of growth of "infotainment" is blurring that line of asking reporters what is newsworthy and what isn't. Is a story which will draw in the 18-24 year old female set who has disposable income (such as the Hilton story) more important than the exchange of power between Blair and Brown?

The reporters have a fairly rigid set of journalistic guidelines which are supposed to help them make decisions about what to report that they should have learned either in college or in the first week on the job. Those guidelines, unfortunately, don't mean too much to accountants trying to maximize a profit.

Perhaps the political polarization of the US has become such that stories such as the gov't in turmoil make people uncomfortable and they don't want to watch, but nothing about Paris makes anyone uncomfortable, so its safe to watch, and thus generates more eyeballs/ ad dollars.

I have never actually seen Broadcast News, but I think it has Holly Hunter, so I should make the effort.

Go rent it immediately. The point you made above is the point of that movie, but it's also really, really amusing. Great flick.

"There is a bizarre countereffect to the Paris Hilton phenomenon: a little like the children’s taunt, “I’m rubber, you’re glue,” the sheer absurdity of her fame ensures that anyone who denigrates it looks even more foolish." From this New York Times story.

I think that awareness is part of why some journalists may try not to cover the story at all. But, c'mon... if you want people with oddly disproportionate egos... go no further than Ms. Walters.