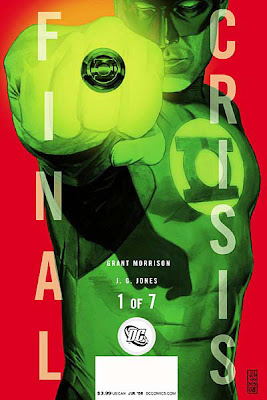 DC Comics' mega-event of 2008 is the Grant Morrison penned "Final Crisis". The first issue hit the stands Thursday, and I picked up the issue Friday.

From what I read, I would never recommend that the issue be taken as an entry-level comic to the DCU. The story is mired in DCU characters and continuity, and asks that readers have been paying attention to recent output from DC, but also picking up key collections as they've been released of late.

None of that is intended as a criticism. At some point, you're either allowed to tell stories for people who have been following along (see: Lost, BSG), or you're stuck in the perpetual cycle of episodic storytelling, where the reader can pop in and it doesn't matter if they're familiar with the concepts and characters before tuning in (see: Law & Order, most police procedurals).

The story actually seems to make events such as the abysmal "Countdown" make some sense, as well as the uncompleted, unnecessary "Salvation Run". It embraces characters from Kirby's 70's run on New Gods, Anthro and Kamandi, while seamlessly embracing recent events in the DCU, such as Johns' introduction of the Alpha Lanterns in Green Lantern. Morrison also plays with some of the toys he created during his mega-series "Seven Soldiers of Victory", and its probably worth returning to your issues or collections of that series to get an idea where he might be headed.

But what I've always enjoyed about Morrison's stories is that, despite the need for our heroes to win, his set-ups don't tell me how the story will unfold in a neat pattern I can consume with the predictability of a McDonald's meal.

Unlike Marvel's competing event "Secret Invasion", "Final Crisis" isn't telegraphing the ending before the story has started. I am picking up both series, and, honestly, compared to last year's "Civil War", I've been a bit let down with Secret Invasion since sometime last fall when Elektra was revealed as a Skrull in "New Avengers".*

I've already read considerable negative noise in the blogosphere on "Final Crisis", and much of it is a reminder of the grim state of the monthly comic. A lot of it seems to bemoan that the reader isn't able to jump into the story with page 1, which seems a bit unfair. Morrison does what he can to provide exposition without recounting 40 years of DCU history.

As I mentioned, I don't think this would be a great first comic to hand to someone, but I also don't think that asking readers to pick up on contextual clues or have the slightest bit of knowledge of the DCU as a comic reader is that tough of a request.

But to address some particular resurfacing internet complaints:

(a) If you have to ask who Dan Turpin is, well, bone up on your Kirby and New Gods reading, or just check Wikipedia. (b) Maybe if the reader continues to follow the series, s/he will be rewarded with knowledge of who characters are and what is going on.

(League special nerdy snark: If some are confused by "new characters"/ obscure characters (gasp!), you might want to note that DC is telegraphing to readers what MIGHT be important in upcoming storylines by what its including in its re-release of older material.)

The art of the issue, by JG Jones, is phenomenal. He seems to have a tremendous ability to meld the mundane and the fantastic, and portray them side by side without either seeming silly (and did you see his Metron?). The coloring is excellent, the rendering and composition top drawer. I've mostly known Jones as a cover artist, but I'll need to do some research and see what titles he's previously handled. It's not the same hyper-realistic style we'd see out of Ross's watercolors, but there's always room at the table for terribly talented artist.

This issue included a lot of what I've found exciting about the DCU. The New Gods, The Question, Green Lanterns... and a history that extends back to the cavemen with Anthro and Vandal Savage, all the way to the 31st Century and beyond. This issue only plants the seeds of what could be a great series, but the pieces are in place. Fallen Gods, Red Skies... Color me intrigued.

I guess the watchword I'd share on Final Crisis is: Patience. Comic nerds can be such an impatient lot, insisting on instant gratification, plotting and pacing be damned. Just get to the fights, and don't ask the reader to work.

It seems the same lack of patience which has marred many reader's experience during the current, phenomenal run on Morrison's Batman (which is taking the better part of two years to come to a head) may also rain on the parade for Final Crisis.

What readers seem to forget is that super-hero comics are often plagued by writers and story lines that start promisingly, but end with a whimper. Look at virtually any 90's era DC cross-over, from "Final Night" to "The Death of Superman", and you'll see potential squandered as the big ideas come out of the gate first, and its all about the writer trying to scramble once they've got the reader's attention. And, honestly, I kind of felt that way about issues 3-6 of Marvel's Civil War (for this reader, the outcome that seemed most logical won out).

So give Final Crisis some time. Give Morrison's Batman some time. And, for God's sake, give All Star Superman its due. We're getting great comics from the guy, and it feels like we're headed to a point where DC has trimmed the excesses of the post-Infinite Crisis DCU and is finding out what really works.

And I think Final Crisis, given time, will define what that will mean for DC Comics for the next few years.


*Really, the story of Secret Invasion, to anyone who'se ever watched TV, should play out as a big superhero slugfest which will involve super-heroes realizing their teams have been infiltated by spies, go through unease that comrades have been aliens/ bodysnatchers/ commies/ what-have-you, and it will all end in a big fight where the heroes team up and push the enemy out into space. It's all very "They Live". With superheroes instead of Rowdy Roddy Piper.
Posted by The League at 11:24 PM

although, thanks for the heads up about Venture Bros. season 3!

I'm more or less beta-testing Twitter. Honestly, I don't really get it, but it was suggested I try it out.

I have removed Twitter from the site. I just don't see me using yet another @#$% social technology.

Hey, remember me? Sometime DC reader who complained that DCU #0 was inscrutable? Well, I'm back, and I'm not complaining about Final Crisis. I may not know Anthro, Turpin, or an Alpha Lantern, but it all seemed pretty clear in context, and the story was engaging. I guess having read 7 soldiers got me up to speed on the New Gods human, um, forms or avatars or incarnations or whatever, but seriously, I enjoyed it. Frankly, the only thing that rang hollow for me was the Monitor business, but from my recollection from IC, Monitors should be powerful and somber, not scheming and melodramatic. But, whatever, in general I thought the 1st ish was great. Oh, and good riddance to Jonn Jonz, now the JLA can get back to being more like the Superfriends. Ok, that's it for now.

fantomenos, I shall never forget you. Indeed, I plan for the last words to pass from my lips to be "fantomenos...!", which will drive my heirs insane as they try to divine the meaning.

Anyhoo, yeah, if you skipped Countdown (and if you did, you are smarter than me) you missed the slow mutation of each of the 52 Monitors into separate personalities.

I, for one, am down about the loss of J'onn. I own the short-lived Martian Manhunter series, a full run of a mini from the Giffen JLA era, and I confess that I have a Beanie baby Martian Manhunter.

No, seriously. I do.

I'm a fan. But i also think that after the JLA: Trial by Fire series, DC has not known what to do with the character. I'm not sure killing him is the right narrative solution, but I think it solidified how our new friend, Libra, is going to be a challenge. Especially with the casual "look, this isn't a big deal" manner of dispatching he employed.

Hey League, isn't "fantomenos" the name of the sled you never get to use because you live in Texas?

Indeed. It sits forgotten in a shed, a symbol of the happiness I can never have because Austin knows no snow...