Well, we can mark another win up for UT from this weekend. We're ranked #3, which is odd. Of course, we've only lost to Tech who seems headed for all kinds of glories this season.

Colt still looks great, but its clear someone or something is keeping him from running. And something has rattled him and keeps him from attempting passes further than a few yards at a time.

I am still rooting for my Horns, and I think we're set for a great bowl game this year, provided we can win our next two and do well if we're in the Big 12 Championship (if we so land). But I sincerely hope Mack brown has plans to build up our secondary for next year.

Today we met the A&M contingent of our office halfway between Bryan and Austin in Giddings where we ate meat. Leaguers, if you're on 290, I HIGHLY recommend the City Meat Market. That was some top-notch grub served in true Texas fashion.

And, hell, there were honest to god old school cowboys in there. The kind who could choke the life out of you if the notion so took them. Awesome.

It was one of those places where the smoke is cooked into the walls and you start salivating a bit just walking through the door. And the food totally matched the ambiance and first-smell guesses as to what you would get.

I need to use this winter to begin making BBQ pilgrimages around the state. Meatgrimages, if you will. I want to eat Elgin Sausage in Elgin. I want to eat ribs and beef in Lockhart. Shall I go to New Braunfels for Wurst? Or to Kerrville? What meats did our Czech forebears cook up? What about our Mexican forefathers?

So many meats. So little time.

Swedish dance bands from bygone eras.
For some reason I think I linked to an earlier version of this, like, four years ago.

Yeah, go ahead and laugh. Then ask yourself: who had better luck with swinging Swedish women, you or the dudes in "The Schytts"?

That, Leaguers, is the sound of the universe having a good laugh at you.


Beat it!
So I employ Technorati to help me track responses to blog posts. They track, somewhat imperfectly, whether or not someone has linked back to your posts.

A long time ago, I used to get linked around the net. When I don't post on comics, those links tend to dry up. But when I write for Comic Fodder, I notice that I get linked to a lot more often from sources of note (in the comics blogosphere, which is like being a big wheel on the island of misfit toys, I guess). Anyway, it gives me a little thrill to see myself linked elsewhere because (a) it lets me know others are going to come read whatever I wrote, and (b) it lets me know people I care about reading have actually read whatever I wrote. And that, Leaguers, is the blogging circle of life.

One of my fave-rave sites for YEARS has been Heidi MacDonald's "The Beat". So, I was thrilled to see in the links of Technorati that Heidi had linked back to a Comic Fodder article I'd written for last week about the economy and what comic publishers could do to save their skin in these troubled times. But at Technorati, when I clicked on the appropriate link... the article was no longer there.

I was sad. Heidi may have had good reasons for either pulling or never posting the article, but my fifteen minutes of Heidi-powered linked fame was gone, and I was left with nothing but a small reminder of what could have been.

Oh, Heidi... why hast thou removed my linky link?

Okay... yeah, the article was kind of weak.

That said, the guy who wrote the article that spawned my article DID link back (it's the line about "longish think piece"). Which is pretty huge in my world. Unfortunately, Spurge wasn't in the mood to elucidate on what he had in mind. Would have been interesting. Anyway, he's been covering comics and the economy for a few days and its good reading.

In case you missed it, here's the official flyer for the Melbotis New Years Hullabalunacy: 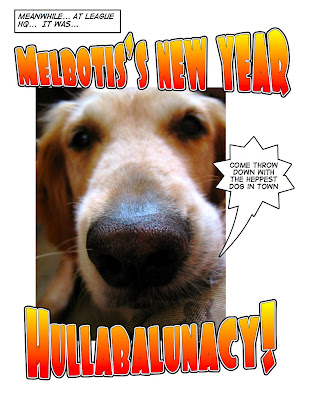 To see the invitation, go here.
Posted by The League at 7:16 PM

If you need a wingman on these meathunting expeditions, I'm your Huckleberry.

That's genuine Ruffino meat you be eatin' at The City Meat Market.
Mikey and I have often talked of going on a BBQ tour of texas. Maybe we should plot out some places and take BBQ by storm!!!

Well, my Meatgrimage continued to today at Jaspers in Waco where I had some awesome ribs (all you can eat for under $9.00).

And even as my bosses and I were eating ribs, we were still talking about the meat at City Market. It's just that good.

Tell Mikey his people have made me a fatter but happier man.

And, yes... I would love to eat my way across Texas. Is there some map of Ruffino meat destinations we can hit?