Tonight was my office Christmas party. Lovely, catered affair at UT's new hotel/ conference center. Well, by office, I mean the entire library staff and their families showed up. It was a few hundred folks as far as I could tell.

I'm still new, so I stuck close to people I know, met some new people, drank some coffee, ate some food, ate a cookie. It was, all in all, very festive. And, it was interesting to see how so many people related to one another. A lot of them have been there for a career, and some were back after retiring.

I've never worked anywhere before that was somewhere I believed I'd be for more than a few years. Or where people took it for granted that their jobs would be there tomorrow, even when I worked at other university jobs. I'm not sure I believe I'm set for life, but it's an interesting dynamic. And a nice thought.

I don't know. I'm not ready to say I'm settled in quite yet.

I'm actually in Austin straight through, but thanks to the unique schedule of the University, I'm actually off starting tomorrow at 5:00 until after Jan. 1 (but we miss basically every other federal, state or other holiday).

I'm looking forward to some downtime that doesn't include unemployment.

There's a lot of "chore" type stuff I want to knock out, but if you're around and about, give me a shout.

This also means light blogging will probably also continue throughout the break.

I was asked pretty specifically not to repeat my Holiday Poetry experiment this year. So, alas, you poor suckers. No Holiday poem this year.

Not that anyone ever seemed to read the poems...

I Have No Idea What is Happening Here

...because it looks like Santa is an unwilling participant in this image 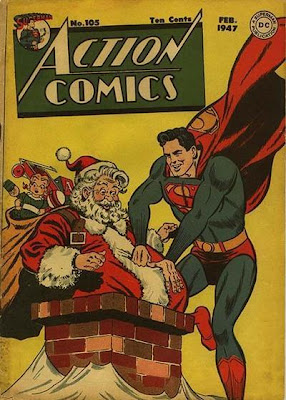