Before I begin, I just want to say, I told co-worker Otto on Friday, as my last words before we parted ways "Texas will win, but its going to be ugly. I'd say we'll win by 10." I am Carnac the Magnificent.

I had no expectations at the start of this season for the mighty Texas Longhorns. As much as I would love a victory in a BCS bowl each and every year, that's just not realistic. So if we can get a winning season, and Colt McCoy has a final year worthy of his career at the University of Texas to date, then... good enough. 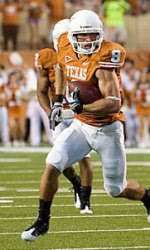 Fans took it for granted Texas would roll over Louisiana-Monroe, and they did. And then, last week, against Wyoming, most fans were expecting a 45+ win, and were left scratching their heads when UT looked less than stellar in the first half, only seemingly waking up in the second. Sure, they won 41-10. But it wasn't a slam dunk 41-10.

(editor's note: For some reason I wrote "34-10" initially for the 2009 Wyoming/ UT score. It was late. I was full of cheese and sausage. I have no idea where I got that number. Let that be a lesson to you when you try to blog when you should be asleep.)

And so onto this week.

You have to admit, Colt's inability to complete a pass longer than 5 yards and a secondary that seemed utterly perplexed for the duration makes for an exciting game.

I honestly believe Colt just had a rough half a game (maybe the offensive half, but...), and that the issues with the secondary are correctable. But there's no doubt that something looks off with a team that's got some inflated currency in the polls.

Obviously neither issue was a game-ender, but it does say there's a lot of work to do before UT plays OU in Mid-October.

Speaking of OU... after a tough first week, they've already found another Heismann contender in Landry Jones. Holy crow, is that guy good. Sam may be out of a job even if he wanted to come back in a week or so. But good news for Sooner fans is that they are, minimum, getting a sneak peek of the possibilities for next year.

Also watched the U. Mich./ Eastern Michigan game, just'cause. Not as interesting as the UCLA/ Minnesota game.

Meanwhile powerhouse schools like USC and BYU were taken down this week, giving all those pundits room to pause (as if USC doesn't ride a largely unearned wave of LA-centric good press every season). Today I laughed and laughed (with a hint of madness) when I saw the clips of the final moments of the USC/ Wash game.

Finally saw the Florida highlights. Man... Those guys are really a #1 team. If Texas had to play them... yeesh.

But... let me be blunt. I was not only unhappy that Texas lost to Tech last year, thus screwing up our BCS standing, but, if I may, Raiders fans might note that UT fans did not tear bleachers from the stadium and storm the field (we save that for OU and TAMU games, thank you).

So, yeah. There's a certain relief that Tech (one of about four schools who consider UT their primary rival. You are not. That's OU, whom we respect and fear. Then TAMU, who is our sabre-rattling cousin who shows up on the holidays drunk and looking for a fight) is out of the way, with a mark in UT's win column. Had UT let this one slip away at home, we'd be kissing this season good-bye. I can wait for the OU game before we do that.
Posted by The League at 11:12 PM

Colt used the word himself: consistency. UT has a lack thereof. There are some things you just have to do on a regular basis, and I promise, OU and OSU will be doing them. I don't know what tapes UT watched last week, but they didn't adjust super well once Tech hit the field on Saturday. That slant pass to the left? Tech did it every time, and got yardage. We couldn't pull that off three times in one game, and that's a basic drill. UT makes me nervous when they are unable to establish regular drives. I'm just not sure how long you can play that way, but then again, look at Mac's record. Excellent. It just befuddles me, and I'll just keep almost having a heart attack.

Colt was suffering from the flu up to the start of the game. Just fyi. We still looked out of sync but sometimes you can't be 100% all the time. We'll see how we bounce back.

Colt's flu didn't mean the secondary should have given up yard after yard. I knew Colt was just having a bad week. I'm in season 2 of feeling as if Muschamp's strategy only sort of works.

I wish I had seen that USC game. I was at a party and overheard some people who knew nothing about football about how people were excited UW just beat USC, and I was totally flabbergasted I thought they were mistaken. UW had 0 wins last year. ZERO.