The series leapfrogs the Mercury and Gemini missions (I recommend "The Right Stuff" for your Mercury mission entertainment. $6 at Amazon.). We've been watching the episodes, and it's astounding to watch the show and understand the difference between the national mood at the time versus the national mood of today. 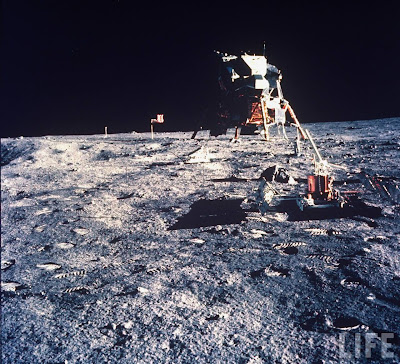 As the Obama administration seeks to increase the funding of NASA by about 5% (a budget which has remained somewhat flat since 1992), its worth noting that the proposed budget of $18.7 billion is about 1/2 of one percent of the federal budget. For a single program, certainly worth noting, but an echo of '66, when it came in at more than 5% of the U.S. budget.

I'm no federal budget expert, but the NASA budget didn't shrink by a whole lot, so looking at the year, I'd assume military and social programs increased in scope around that time.

But here's what I dig about NASA:

NASA is about problem solving, for the distinct purpose of human achievement. The goal of NASA is to look at the impossible, figure out the math behind what makes it appear impossible, and then work and work until you can manage the figures, the training, the machinery, etc... until the impossible is achieved. In many ways, NASA (and other space programs) are engineers and scientists unlocking the greatest puzzles put before us, and discarding common thinking in favor of seeing each insurmountable problem as an equation to be solved.

If it takes enormous thrust to lift a small capsule out of Earth's gravity, then you put a 360 foot Saturn rocket underneath it. If you need lighter materials for your LEM, then you develop that material to specification. If you realize its going to be a bit of a challenge to actually get people back from the moon, you develop the math and the science to do so. Not to mention the computers, space sextants, and lunar vehicles to do so. 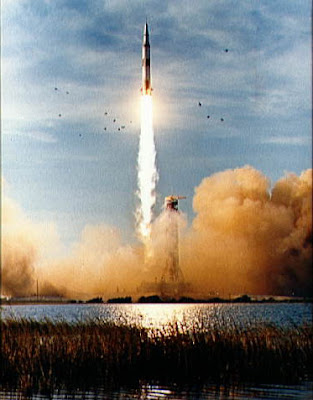 Instead, I'd guess, we've turned that spirit of innovation inward, to amazing technologies that have revolutionized how and why we communicate, reinvented commerce, etc... And there have been tremendous side-effects in medicine, in education, and other areas that could never have been able to get there on their own.

And while its been an amazing era in which to live, its difficult to point to much in the way of a shared national experience of the last decade aside from 9/11. Or even markers displaying that the government/ the US can achieve a specific goal if it tries.

From a pragmatic view, its worth noting that the space program of the 1960's was also a boon to our technology companies in non-military applications. North American, Grumman, and countless others were contractors and responsible for achieving the goals of the Mercury, Gemini and Apollo missions.

Keep in mind, that Space Shuttle Discovery saw its final flight in the past few weeks, and there is no vehicle planned to replace the Shuttle program. Its not without irony that I note that we're retiring not just the name, but perhaps the very spirit of Discovery. 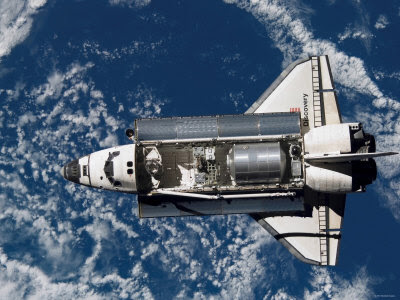 There's no question that something like NASA is one of those items that's easy to point to when one bemoans "big government". The average American will not be jumping in a rocket and vacationing in space any time soon.

It may be that we have to look to smaller, cheaper efforts which ride on the shoulders of giants, such as Burt Rutan and his success with Spaceship One. But for as amazing as Rutan's feat truly was, Spaceship One did not enter Earth orbit, and it most certainly did not reach the moon. It replicated a feat forty years old. And since the 2004 X-Prize, the progress has been infinitely slower than the space race.

And if we genuinely don't care? If we've got enough in the way of bread and circuses that we can't be bothered to look upwards anymore? I won't be all that surprised.

Columbus's voyage was to find a route for commerce. The western expansion of the US was to find agricultural space to feed us, to exploit natural resources, etc... Our knowledge of the ocean floors will come from energy concerns looking for new deposits of resources.

And while it gets us there, it will always be a question of dollars and cents and supply and demand. It will rarely be because its the challenge worth undertaking.

So rather than point to the possible benefits you'll get from the space program (microwaves! Tang!), I'd ask whether we've decided that we're a people who believe each dime spent should get us an entitlement? Or whether we want to celebrate, support, and demand that we're going to face down the impossible and make it a reality.

I'd like to know that kids will think that if they study hard enough or work hard enough, they get to try an EVA one day. Or design the suit that makes the space walk possible. I don't have kids, but all I'm saying is, I wouldn't want to be the one to explain to my kids that he won't ever see a manned space mission because we didn't think it was important enough.

Its been 40 years since we stepped foot on the moon. 40. Even if we want to keep that eye turned inward, then what impossible challenge should we be able to overcome tomorrow?

That's not to say NASA couldn't be operated more efficiently, or should be written a blank check. Stories you hear suggest NASA has become a slave to regulation and red tape (not just in the safety department) and has had a hard time keeping pace with modern technology management trends. But that doesn't mean you throw the baby out with the bathwater.

That said, I'd like to see a person walk on mars before I croak.
Posted by The League at 3:35 PM

Your reach should exceed your grasp, or what's a Heaven for? - Robert Browning