The League Reads: A Princess of Mars

So on the plane to San Francisco I decided to read a book I'd picked up on a whim at Half Price Books, the first of the John Carter of Mars series, "A Princess of Mars".

I did not pick up the book just because there was a boob on the cover, but because the John Carter novels are occasionally discussed in the deep-dive-geek-circles, as a sort of watershed of fantasy and science fiction, or, more accurately, one of the early works from which all other sci-fi flows. There was also a glimpse of Carter in one of the "League of Extraordinary Gentlemen" graphic novels and it looked neat, but I had no idea what was going on.

Written by Edgar Rice Burroughs, whom you probably think of as the creator of Tarzan, the first John Carter novel was released in a serialized format starting in 1912. What is genuinely shocking is how little the genre of sci-fi has changed in the ensuing 100 years, and how much of an effect the John Carter novels must have had on the readership, leading to everything from Superman (1938) to Flash Gordon (1934) to Buck Rogers (1929). 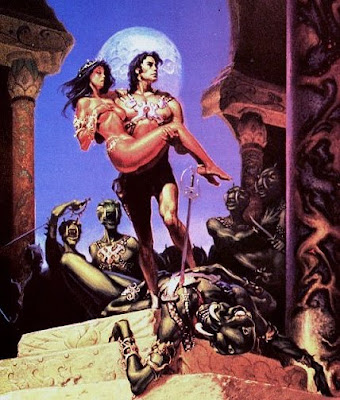 It should be mentioned, the first in the series that I read, "A Princes of Mars" would be better served categorized as a fantasy novel, as there's little in the way of "science" in the book. The how's and why's of technology do exist, but aren't the focus, as the Mars portrayed is a clannish, barbaric world more akin to a Robert E. Howard novel than Asimov. And, certainly, one can see the various races of the Moons of Mongo and the arrival of Flash Gordon, swashbuckling swordplay, and flirtations with the princess as a direct descendant of "A Princess of Mars".

Wikipedia is helpful in trying to figure out what may have spawned some of Burroughs' concepts, but its nothing I'm terribly familiar with. By today's standards (of which much of fantasy and sci-fi, I'd guess, is a 20th generation copy of a copy of copy of a...), the book can feel a bit dated and off, but its also like seeing a 1935 Duesenberg Phaeton and just marveling at how this sort of thing was put together in comparison to today's autos. There's some passion and artistry, even if they don't have the cup holders, iPhone drop and electric heating seats.

While it was often difficult to buy the astounding luck and superhuman genius of our hero, the book does a great job of defining the cultures of the various Martian people, and glimpses of their history. And, he provides an interesting mechanism for how, pre-Werner Von Braun, Burroughs conceived of how his character would appear upon the surface of a neighboring planet. A concept I suspect Adam Strange comics have lifted, most notably in the recent run in Wednesday Comics.

Carter is, by the way, a Virginian gentleman who has served a tour of duty in the Civil War. Who has something going on with possible immortality prior to even arriving on the Red Planet. Its interesting to see a sci-fi hero from a by-gone era, and its an interesting juxtaposition with the Barsoomians, and how Burroughs frames' Carters relations to them.

Readers should recognize the books is both well ahead of its time in many ways, even as it's oddly chaste in its depiction of romance, and only occasionally shows glimpses of alternate ideas to gender roles as the author may have felt most comfortable in 1912. And, of course, the earthly virtues of a gentleman of Virginia often win the day for our hero in the barbaric Mars. 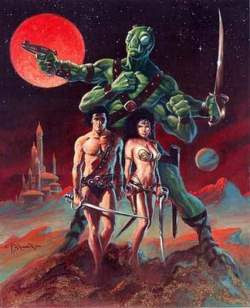 There's also a scene in the book during which Carter lays a kiss on the titular princess, and I thought "well, man... I can totally, totally see this as a movie". Which, you know, in 1912, its entirely unlikely Burroughs was envisioning crazy CGI FX and a screaming Queen guitar solo.

Clocking in at around 160 pages, as a slow reader, I got through the book in two plane rides and maybe an hour in the hotel. So even if its making you miserable, the book is a quick read by normal human standards.

I have several other books to read, including a couple of Dune books (which I think was an interesting book for comparison), but I am interested in reading a few more of these John Carter books.

By the way, Pixar is supposedly working on a John Carter movie.

Anyone else read this book?
Posted by The League at 8:32 PM

I have not read it, though now I'm interested to do so. I have read some other Carter's work and enjoyed them, but as fiction and as time capsules of his day.

The John Carter series are ok. Great for reading when you're in junior high and wanting some pulp action series to read. Basically, what makes the series fiction remarkable is that it really was cutting edge genre way back when it was first published. Nobody was writing heroic fantasy back then and Burroughs carved out an entirely new literary niche. It was very original stuff that captured many people's imagination.

It is what it is, good pulp fiction. What you really need to read is Intervention by Julian May, this book is fantastic:

I would agree, NTT. The value in reading it is seeing the earliest of a genre that's become a part of our landscape of escapist entertainment. And it is genuinely fun, breezy reading that I can confirm that I would have really liked at age 12 or so.

Glad to have the recommendation. I've got three books in queue. When I wrap them up, I will ask you again about this book.