Its no secret The League has not served his country, or, really, anyone.

We are very proud of the service done by The Admiral (not actually an Admiral, but formerly of the USAF) who served in Vietnam and of our Grandfather's service in the 82nd Airborne during World War II. And let me point out that Jamie's own dad was Army for many years (on the front lines against tooth decay, but that's just one way to fight a battle, people). 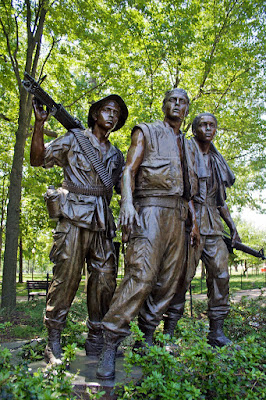 We looked with awe at these men and women's service when we were younger, but as time has marched on, that's deepened to true gratitude. I have never had to pick up a gun, I have enjoyed my freedoms without worry, lived without worry of any attack upon me or my family, and there are millions who have served to ensure that could be true.

It is impossible to say that its easy for me to see the purpose of some of our wars and military actions. To pretend the US has always been in the right in all military application is dishonest and to suggest otherwise means we cannot learn from past error and judiciously consider when we put troops in harm's way. But we've always had brave men and women who were able to be there when Uncle Sam asked. They've done it for little pay, for little glory, but because they could serve, and that's something we can't treasure enough.

The League of Melbotis salutes all veterans today, whether infantry or sailor or technician or dentist.
Posted by The League at 9:46 PM