Last night I went to an after-hours event at Austin Books with a special display of what they term "Showcase Comics". These are comics that are not in the plentiful back-issue bins, but which the good folks at Austin Books have recognized of being of exceptional quality either through what state they are in or because of their value to fans.

What made last night particularly interesting was that it was spotlighting some new comics that Austin Books had recently acquired, including a large Golden Age collection, all held by the same person since they were bought off the rack. I saw Superman and Batman comics (and had one in my hand) that I assumed I could easily have never seen in person. 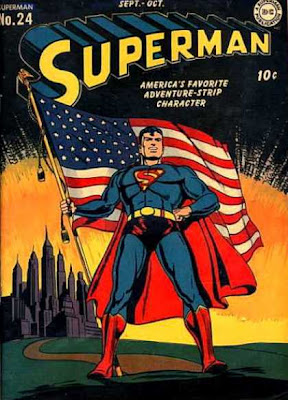 For good or ill, I brought my personal financial consultant with me (Jamie) to ensure I did nothing rash, and while I very much wanted to bring home Bob Oksner-covered Superman issues in the #20-50 range, I decided it was okay to have just had the good fortune to see them.

There's an amazing amount of history to those comics, and to know that they have been in a single person's possession all these years is astonishing. Many valuable comics are bought and sold as a commodity, and its not hard to believe you're the third or fourth person whose owned the comic when you're looking at the more valuable stuff. But seeing a kid's signature get neater on covers as the years progress gives you a moment of pause. Let alone that the kid hung onto these comics for so many years.

There are the War Bond ads on some covers, and Superman beating up Hermann Goering on others. They're not just Superman collectibles, but a slice of the zeitgeist of the era (as comics so often are. Someday, you need to Google "Prez, the Teenage President").

Anyhow, I had opportunity to consider my own fandom and chat with the hardcore collectors who were there (and absolutely know that angle of the comic collectible market). It was reassuring to see that they're still picking these comics up out of love, not as investors. One gentlemen mentioned to me that he'd never actually resold a comic, which, considering what he was buying, sort of blew my mind.

Rather than sulk, I did manage to grab a Jimmy Olsen issue and a great Kubert-drawn Enemy Ace comic.
Posted by The League at 12:35 PM