Well, it's certainly a television show, isn't it? It has actors, and sets, and stuff.

I was really looking forward to having an excuse to stare at Elizabeth Mitchell once a week, but they are really making it difficult to want to see Mitchell slog her way through clunky exposition and this mix of V and "Invasion of the Body Snatchers" (who is a lizard person? ANYONE CAN BE A LIZARD PERSON!!!!" Thus, lots of squinty looks and insert shots of extras because everyone is a suspect!!!).

It just feels like the show refuses to acknowledge that the same audience that's made Lost a hit could be patient enough to let them tell their story. Ie: Lost may have gone too far the other direction, but if there's no mystery to what the invaders are up to (and I'm guessing stealth invasion) and you won't even put it through its paces, if you can't be patient, why should I be?

If Aliens show up in massive ships with an iffy sounding agenda, amazing technology far superior to anything we've got, and seem to be trying way, way too hard to ingratiate themselves to us, I expect you will at least TRY to have a military presence, quarantine, etc... in the first two weeks of their arrival.

Not just act like a busload of Canadians or "Up With People" have decided to camp out in a parking lot.

Anyway, week 2 wasn't any better than week 1. They get 1 or 2 more weeks. Even with this ridiculous subplot featuring the kid.

Also, if you think nobody would be shooting at those big ships, Hollywood, you really, really do not know America.

What sort of annoys me is knowing that all the sci-fi fanboys who insist that anything that's genre fiction is worthy of being saved are going to love this show.

Still. It has Elizabeth Mitchell... 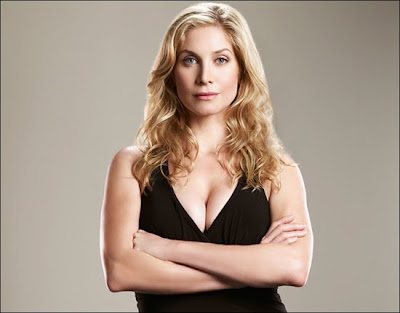 Yeah, so far we've got a bunch of one dimensional characters, and a plot that feels pretty uninspired (they're not even doing a very good job with the plotline of the original series, let alone improving upon it).
I think it'll still last a season or maybe more, but I'm not very impressed thus far.

I was going to comment on the photo, but I probably can't say anything that won't get me in trouble at home.

I think Jamie usually clues in when my usual endless stream of criticism of whatever program we're watching dries up. The show has managed to sufficiently amuse me (Big Bang Theory, Venture Bros., Sunny), or I'm distracted by Elizabeth Mitchell. So I might as well say something, anyway. Its not like Jamie doesn't make comments about dudes on TV.

Wait, it's a show? I thought it was a mini-series.

Man, this is the 3rd time I've looked, including on the ABC site, and everything looks like this is an ongoing series.