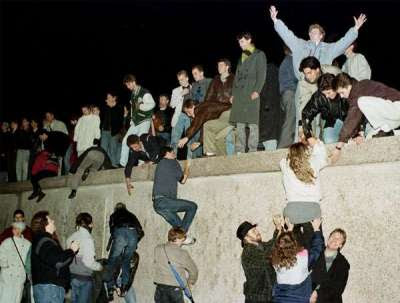 I was in 9th grade when The Wall came down. A lot of people are going to have something much more intelligent to say about the fall of the Berlin Wall. I see no reason for that to happen here, but I'd hate to let the moment of the 20th Anniversary fall by the wayside without mention.

To some extent, as memory serves, I was born and raised and nurtured on such a steady diet of NATO and America being Awesome and Communism being Evil that there was a hint of inevitability to the wall eventually coming down, but nobody thought it was going to happen when and how it did. At least in the group of 14 year old boys I talked to. We mostly believed it would be in 250 years after a fierce laser-pistol and Commie-Robot-Army battle.

The climate prior to the Fall of the Wall, and the domino effects in Eastern Europe, meant I was used to regular patrols of my neighborhood by F4's from the local Air Force base, and mutually assured destruction as routine a thought as if I wanted Coke or Pepsi, but there you have it.

In a way, losing The Wall was a bit of a bummer. The Wall was this big, obvious metaphor that we got cool movies based upon where democracy-loving spies, Germans, etc... got to cross the wall and shoot the bird at Evil Communists as they snuck past them in the night.

Mr. White, my 9th grade geography teacher, made sure we watched video of Germans partying along the wall as it was being destroyed by hand. A bit of a former hippy and amazingly socially conscious for a high school geography teacher, Mr. White saw to it that the import of the moment was not lost upon us. Although he did not include in his lesson that it was President Reagan's magic fairy dust that brought The Wall down, as the story has now been written.

For a bunch of kids raised to believe that sooner or later, we were going to be going bayonet-to-bayonet with some Godless Commie (most likely right there on top of The Wall), suddenly realizing Glasnost was sort of working out came as a total @#$%ing shock. Hating Commies was just part of every day life, and with The Wall coming down, it was now just... over.

I really have no idea how German reunification went. Fine, I suppose. I don't remember nearly as many stories about East Germany as I've seen on Russia and the legacy of 5 Year Plans and factory cities being shuttered.

I've now met more people from East Germany and Russia than I have from Delaware or Maine. My colleague is married to party official's daughter. My pal Dan is married to a Russian molecular biologist. Its a crazy world.

Sure, in the ensuing years we ignored the lessons of Rambo III and Nostradamus and found all new people to pick a fight with, but its just not the same. Back then it felt a bit more like "my local sports franchise is better than your local sports franchise". The Russians and East Germans were jerks who would nationalize your lemonade stand, but they didn't live in caves and declare 1000 year jihads upon you. Building better jets to keep up with your enemy used to mean something, dammit.

It wasn't until later in high school and certainly in college where I began to understand why Russia didn't exactly spruce up East Germany, and hadn't taken to cuddling the Germans like best buddies. It's still amazing that Berlin managed to exist in its split island state as long as it did. In many ways, that's something that I believe future generations simply will refuse to believe existed, when nobody remembers Checkpoint Charlie.

Germany has experienced a reunification that most didn't expect, and it makes one wonder if, cooler heads prevailing, the DMZ couldn't disintegrate and Korea become a single state in my lifetime.

I don't really miss the Red Menace, I suppose. Not when we've managed to find so many other threats to worry about. I do miss sexy East German double-agents and movies depicting heroics done in the name of democracy.

Sweet. I am totally looking him up when I'm on their campus next time.

I should also say, Mr. White is the only teacher to ever give me D-hall for being unable to keep my mouth shut. I believe the last phrase out of my mouth was "Oh, please don't throw me into the briar patch!" when he asked me step out into the hall.

I was an awful child.