Comics You Should Be Reading: Action Comics

The League was reading some of his weekly stash of comics last night, and I was reminded that while one of the primary missions of The League of Melbotis is a forum for my Super-Fandom, I don't always mention the comics.

Writer Geoff Johns (Green Lantern, JSA, etc...) was once a film-school graduate working as an assistant to Richard Donner, director of Superman: The Movie. It took Johns a while to work his way through the DCU to his current position as writer of GL, Action Comics, and pretty much any other property he wants to get his hands on.

Honestly, when Donner and Johns took over on Action Comics, I was a bit skeptical. Johns' love of Superman was well-known, and I was concerned he would be too concerned about making a wrong move and begin on a forgettable run. But that wasn't the case. 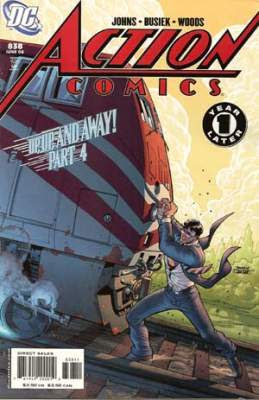 The Up, Up and Away storyline ran through Superman and Action Comics in mid-2006

Johns teamed first with writer Kurt Busiek for the first One Year Later storyline "Up, up and Away", a storyline which re-set the status quo for Superman and the World of Metropolis. After that, Johns and Donner moved into telling the story "Last Son", which would introduce the triumverate of Zod, Ursa and Non to the comics for, really, the first time. (Zod and other Phantom Zone survivors had appeared in the comics during the Bronze Age, from the Weisinger and Schwartz eras of editorialship, but the trio seen in Superman: The Movie and Superman II were somewhat an amalgamation of characters seen in the comics.)

"Last Son" was a fascinating storyline, but... artist Adam Kubert ran late with his issues, winding up with fill-ins during the middle of the storyline, and culminating in the single, 3D issue of Action Comics 851 (which was cool), but the storyline broke precedent and never actually wrapped up. Apparently series artist Adam Kubert, who had been announced as coming onto the comic with huge fanfare, simply wasn't keeping up with his duties. Kubert helps run the Joe Kubert School of Cartooning, and who knows what else was going on in his private life. 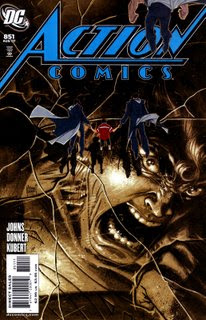 Unfortunately, despite the engaging story, the delays made the comic impossible to recommend, and shook my faith in what Johns was brining to the title. A few fill ins and an unexpected Annual issue later, and the series was back on track with Eric Powell drawn Escape from Bizarroworld. 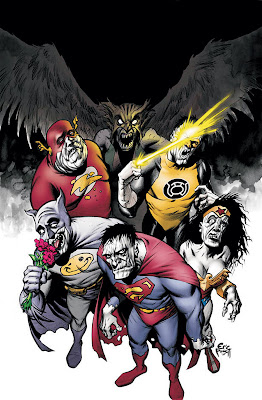 Powell's work on the JLA of Bizzaroworld

With 52 concluded and Teen Titans no longer on his plate, Johns seems to have found focus on both Green Lantern and Action Comics. Donner is no longer on the writing team, and it may be a case of Johns slipping backward into fanboyishness... But the current storyline "Superman and the Legion of Super-Heroes".

Superman is asked to return to the future of the 31st Century, re-establishing continuity lost during the Crisis on Infinite Earths and with the Byrne/ Wolfman reboot of the Superman titles with Man of Steel. He learns that an "Earth First" movement has meant that the true story of Superman, now 1000 years in the past, has been co-opted by the movement and changed so that the people of Earth would believe Superman was born on Earth, denying his Kryptonian heritage. They are using this as part of an anti-alien propaganda, which is leading to war between Earth and other planets of the 31st Century. 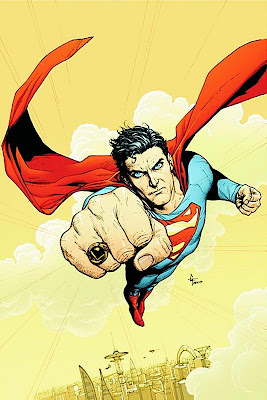 Gary Frank's art on the cover of Action Comics

It's a good read, despite some gaps in logic that could use some explaining. The action is fast-paced, and while it's certainly rewarding to know a bit about the Legion, it's not a requirement for getting into the story. The threats are understandable and of an appropriately enormous scope for a Legion and Superman story. There's a common complaint in comics that the fanboys are now writing the comics, and that's inherently bad for comics. But in the case of Johns, his understanding of the publishing history of Superman and the Legion helps to make a textured read with a good understanding of character and character motivation.

Add in the pencils of Gary Frank, whose style one might compare to a less cartoonish Steve Dillon (sharing the love and mastery of the facial expression), mixed with detail of far more naturalistic artists, its a great look for the title. Especially as Frank has internalized Christopher Reeve for his version of Superman, and gives the reader a Superman with distinct facial characteristics.

You may still be able to pick up this storyline from the first issue at your local comic shop, or may wish to wait for the inevitable collection. Either way, now's a great time to be jumping into Action Comics.
Posted by The League at 12:10 AM