Ahhhhhh... the 1990's. No doubt a time of great change for The League as we went from high school, to college, to, uh... whatever this period is in my life. But as always, The League was there... watching TV and stuff. And while our heart will always belong to Lynda Carter, there are many other Dames in the Media the League Once Dug.

After five years or whatever of maintaining this blog, your erstwhile League occasionally runs out of material. And so when JimD suggested I do a Dames In the Media The League Once Dug 90's Super Post, I thought: Heck, why not?

But who were the DITMTLOD of the League's 1990's? In the very special post, we'll take a look at ladies of the the League's interest in the 90's, both fictional and real. I had planned on doing a top 10, but we'll see how this shakes out.

A few rules I set up: I'm focusing on things that came out in the 90's. If the media came out prior to the 1990's, but I didn't discover it until the 90's, I'm only including one per posting as a "Special Mention".

This is all so much cheaper than therapy.

I'm listing Dr. Dana Scully as those who knew me in the 90's should be well aware of this particular DITMTLOD.

Short, skeptical, a doctor and endlessly patient with her partner, what wasn't to like? Anderson herself interviewed just simply terribly when you would see her on shows like "Late Night", but as long as she had X-files dialog coming out of her mouth, she was smart, lovely, and would stand still for lingering close-ups.

I've never really seen Gillian Anderson in anything but X-Files. Not even the movie where she purportedly runs about topless from her pre-X-Files days. But she was good in the role, and I would probably watch her again if she ever appeared in anything close to the sorts of movies I dig.

Also, she seems to be aging very well if the interweb photos I saw when looking for an image are any indication. 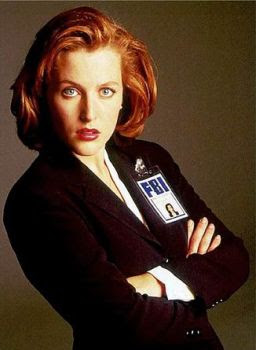 The above photo is a nice image of Agent Scully, but this is the image I had on my wall in college, printed in black and white from my junky Packard Bell printer circa 1995. Because, you know, I was classy.

Amanda Pays first came to The League's attention as News Producer Theora Jones on the program "Max Headroom" back in the 80's. The same cool, confident demeanor she brought to Max Headroom (and a knack for delivering pseudo-sciencey lines) she brought with the same verve to The Flash.

Tina McGee was a biophysicist or some such who explained Barry's powers to him, and thus, to the audience. She also looked really nice in really unflattering circa 1990 clothes. But she looked nice in a lab-coat. 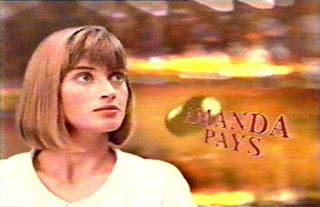 A pre-interweb show that ran for only one season, there's not much on the web in the way of photos from The Flash

Pays remains a mystery to The League as she wound up marrying Corbin Bernsen. Which means Corbin Bernsen has better taste in women than I would have assumed.

Whether as a SuperCop, in a Police Story, as part of a Heroic Trio, ensuring that Tomorrow Never Dies or, after the 90's, as either a Crouching Tiger or Hidden Dragon, Michelle Yeoh was always a favorite of The League.

In 1993 or so, JAL and Michael would grab me and get me down to Hogg Auditorium on UT's campus where they would show Jackie Chan movies on the weekends. If you could put up with the rock-hard seating and the bats which would flit around, you could catch a pretty good movie for almost no cost. 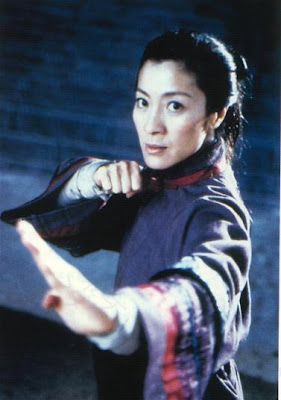 The lovely Ms. Yeoh is now going to cripple you

Michelle Yeoh was in the Super Cop movies, and then in Heroic Trio. Later, I would be convinced to go see the 1997 Bond installment "Tomorrow Never Dies", based entirely upon the fact that Yeoh was in the movie. And, of course, 2000's "Crouching Tiger, Hidden Dragon" finally showcased the actress in a light which I felt finally did her justice for a large American audience.

Since then she's been a favorite in the film "Memoirs of a Geisha". Where she does not get to kick ass in quite the same way.

I invite you to remember the first time you saw Lady Miss Kier in her platform shoes, little retro dress, huge eye lashes and funky dance moves. Add in a fun song, a good voice, and imagine that in Spring, Texas circa 1990ish.

I didn't really understand what Deee-Lite was up to, but I did know The League would always pause to watch the video for "Groove is in the Heart", and not just for Bootsy Collins' awesome bass-work.

Also, Bootsy is from outer space. 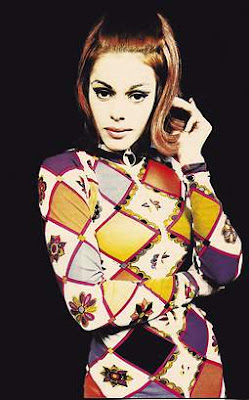 Lady Miss Kier is still actively performing and spinning records all over the globe. The days of Deee-Lite are now behind us, but Her Eminence keeps grooving on.

It's difficult to gauge what sort of impact or impression any one movie has on you as a lad, but certainly those who knew me when will recall my fascination with "Miller's Crossing" and Harden's character, Verna, which lasted for years.

Verna is a tough-talking moll, cut from the cloth of some of the tougher characters of cinema of crime movies of the 30's and 40's, and certainly the books of Dashiell Hammett and Raymond Chandler. Verna was the sort of role that you weren't seeing on the screen all that much in 1990 when Miller's Crossing debuted.

I was a huge fan, and continue to believe its a great performance. But the movie probably gave me some funny ideas about how to interact with the ladies.

As always, The League highly recommends Miller's Crossing. One of the greats of the past 25 years of film. Harden is no small contributor to that film's status. 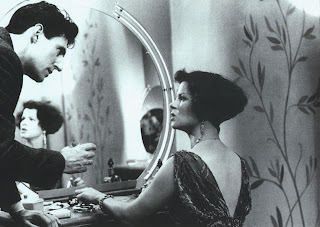 I don't keep up with Harden's work. I think the last thing I saw her in was "Space Cowboys", but I never managed to see "Pollock" or, really, much else she's done. I still want to know what the heck she was doing in "Flubber".


Special mention: Claudia Cardinale as Jill in "Once Upon a Time in the West"

Firstly, is "Once Upon a Time in the West" a great Western? Or The Greatest Spaghetti Western?

(I have a pet theory about why the Western died out. 1) John Ford died. 2) After Leone had his run, what was the point?)

In the tradition of all Sergio Leone movies, Claudia Cardinale is badly looped in "Once Upon a Time in the West". I have no idea if she actually speaks English as I've never had the opportunity to see her in anything else.

Her arrival really kicks the story into gear, and she proceeds to out-tough Charles Bronson. Let me repeat that: SHE OUT-TOUGHS @#$%^ing CHARLES BRONSON, all without ever really using a gun. Also, she out toughs Jason Robards AND an EVIL Henry Fonda.

Probably not the most progressive movie ever made, but a heck of a story and full wall-to-wall with great characters, Cardinale's creation of Jill McBain turns out to be the strongest force in a lawless frontier. Also, her theme by the amazing Ennio Morricone is the sort of sweeping score today's composers could learn from.

That's it for the first installment.

I encourage you to mention your own Ladies of Interest (or Dudes of Interest, depending on how you swing). Also, this post came out of an idea from one of your fellow Leaguers, so if you have any bright ideas for The League, shoot them my way.
Posted by The League at 10:57 PM

I see what you mean about 2:32: Q-Tip's MC skills be without challenger.

To counter the League's post I'll offer some Dudes in the Media Mrs. League once Dug.

Keeping with the 90's theme, I present blur

Interesting. Mrs. League gets neither skinny pants nor a lot of sad puppy faces from The League.

I don't think one would label me as a tough-talking moll either, so fair's fair.

In a bit of cosmic coincidence, E-Action is showing MILLER'S CROSSING tonight.

I hope you took time to watch the movie.

I'd already seen it, so I moved on to American Gladiators.

There is nothing more RHPT than eschewing "Miller's Crossing" for "American Gladiators." That is the total encapsulation of him.

I was coming back to check out Claudia Cardinale and I was reminded of the train wreck interview of Gillian Anderson with Letterman – perhaps this is the ep. you refer to?

I was so heartbroken; she was so un-Scully it hurt. The weird thing is that she can totally act too: See "The Mighty" and "Last King of Scotland".

Lordy Loo, to be kicked in the head by Michlle Yeoh.

I do intend to see "The Last King of Scotland". Hmmm.... I had no idea Anderson was in it.

Let me know when you want to watch last king. Lauren secretly saw it and didn't tell me, so I still want to see it.

Although it's hard to go, "Let's watch a movie about a homocidal psychopathic African warlord!"