Still undecided going into the primaries? How can you make it a SUPER Tuesday?

The League has selected a candidate based on his support of The Man of Steel. 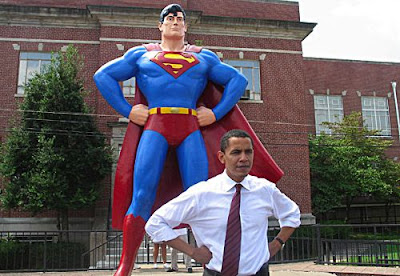 Until McCain, Romney, Paul, Clinton, Huckabee or someone else shows support for the Last Son of Krypton, Obama is our man.

Of course, I can't vote until March, so all the candidates have an opportunity to pick a superhero between now and March.

Who would each of the candidates pick to represent them?

Anyhoo... I would hesitate to say anyone was Darkseid at the risk of offending anyone's sensibilities.

We try not to be too political around LoM, and so I hesitate to...

Look! Rising up in the polls! It's a Huckabee, it's a McCain! No, It's Obamaman!

Don't just write off The Paul-inator.