It seems like Jamie and I have been running around a LOT lately, and with the Holidays bearing down upon us, I think we're going to be pretty crazy until January 2nd, 2009 or so. That's okay. It's sort of what I expect out of the year's end.

For those of you keeping score, Thanksgiving is in only a week and a half, and I have not even STARTED on my Pilgrim suit, nor has Jamie finished her Green Bean costume.


I still think The Addam's Family movies are underrated.

The temperatures cooled a great deal yesterday, and I think it feels more like fall in spirit than a few days ago. All in all, its turning into lovely weather. Anyway, we watched the UT game yesterday and cooked out some nice items we picked up at Central Market (I recommend their chipotle marinated chicken).

UT played very well starting in the 2nd quarter, and pretty much ate Kansas's lunch. I was mistaken, however, that Tech was playing Baylor. A&M played Baylor and it didn't go terribly well. Sorry, Ags. Maybe next year.

Only one more regular season game for UT, and we ARE playing A&M on Thanksgiving, which sounds great in theory, but A&M somehow manages to summon SuperAg strength whenever they play UT. Out only discernible advantage going into the game is home field advantage. Should be a great game, so if your Thanksgiving evening looks like it's going to be a quiet night in, tune in.

Also, if you're a Leaguer and will be in Austin during Turkey Day and are lacking any plans, let me know. We can make room for you.

Today we actually started our Christmas shopping, which I think Jamie had some mixed feelings about. Sure, we're starting early and will hopefully be done with time to spare (which is an illusion. You always forget somebody and have to run out and buy an extra present for somebody you didn't account for). But I also started singing carols to Jamie as we drove around, which is bad enough, but in the past eight years, I've completely forgotten all lyrics to all carols.

I suspect she'd like for me to stop, but, you know, once you're moving into Christmas territory, I think you're morally obligated to squeeze in "Walkin' in a Winter Wonderland" as often as possible. Especially in 70 degree Texas. 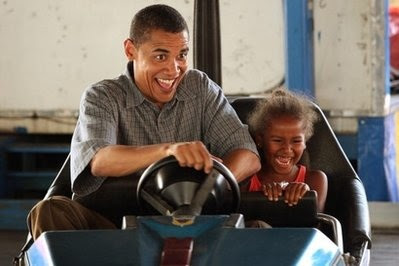 Only a father having fun with his child makes that face.

Well, I made that face before children, but that's because I'm a dork.

One of the best Obama pics that I've seen!

I am just glad he wasn't ina wetsuit and windsurfing.

It's just odd to see such a "Dad" sort of photo of Obama, right down to what we called "Dad Shirts" when I was in college. Just a father of young kids, not leader of the free world-elect or candidate.

Also, here's this guy who was top of his class at Harvard Law, a U.S. Senator, and now president elect of the most powerful nation in the world- and his face is full of absolute joy over driving a tiny go cart whose sole purpose is bumping into other people. It's human nature, and it's so very, very zen.