Comic publishing company IDW, who made their bones with horror comic "30 Days of Night" has scored a major win, by grabbing the license to reprint the entire run of Berkely Breathed's comic series "Bloom County" in its entirety.

Heidi talks about it here.

It's hard to gauge what an impact the series had on me as a kid, and how much Breathed's absurdist viewpoint impacted how I understood the world beyond Pencewood Drive as I was growing up. I routinely had to check the paper, watch the news or check with my parents as to who certain figures were that appeared in the strip as political or pop culture figures (I wasn't entire sure who Tip O'Neill or Jeane Kirkpatrick might be, for example). Nor was the a-political Steans-Clan much of a place where such figures would have otherwise come up in conversation. This was, of course, all pre-useful-internet.

The political aspect was just a percentage of what one could expect. In order to get Breathed's take to work, he filled his world with rock bands featuring tubas, penguins, and tongue-playing cats. An ex-UT frat boy named, appropriately, Steve Dallas (Breathed introduced the character in a strip in the Daily Texan while attending UT). A personal computer that talked back. A divorcee and his son with a working anxiety closet. And a curious lot of commentary about smoking. The cast was not averse to piloting a wheelchair as they role-played Star Trek. And the ever-wise-for-his-age Milo Bloom. Most of it worked. Not all of it did. But a strip or two later the comic was back to cruising speed.

Bloom County was the comic strip that bridged the period when I sort of lost interest in "Garfield" or "Hi & Lois" and found my interest in even Beetle Bailey dwindling. It was just as I was getting into "The Far Side", but probably pre-dated "Calvin and Hobbes" and others. And as simply brilliant as Gary Larson could be in a single panel, or as much as Watterson could turn from chaotic hilarity in one panel to wistful walks in the meadow the next, Breathed built a world of characters with distinct personality, voices, viewpoints and was able to take on any and all topics from "Knight Rider" to Televangelists to why kids listen to metal instead of Billy Joel. 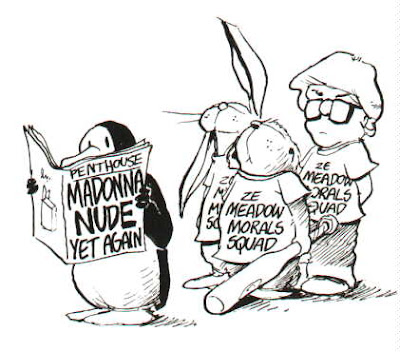 I'm also a particular fan of Breathed's cartooning style, which would barely survive in the strip sizes of today (think about how blocky strips like "Foxtrot" have become so that the images are legible. Of course, Bloom County was never exactly Prince Valiant, either.). Contemporary to Guisewhite's "Cathy", and her stock five poses, and two faces, Breathed's characters had hair, held deeply descriptive body language in their poses and expressions, and existed in a fish-eyed, detailed environment on Sundays or when Breathed needed room to play. Character design was specific and meaningful. And characters leaned, sprawled across and interacted with their environment.

One of my treasured collections is still the "Complete Calvin and Hobbes". I'm slowly building up a run of the Complete Peanuts. And one day hope to obtain the mammoth Complete Far Side collection as well. But that bookshelf would never feel complete without Bloom County as the main attraction, and the opportunity to flip open the pages and re-visit the residents of that creaky, improbably constructed boardinghouse.

Here's a set of strips that are kind of interesting in light of recent events.

I'm not sure I'd point to Achewood as a direct heir to Bloom County, but the large cast of (animal) characters with separate view points, and who do not have to have their lives invaded by Mary Worth is something of a genetic line, I think. Many compared "Bloom County" to Trudeau's "Doonesbury", and there were some similarities as Doonesbury took on political humor, and occasionally featured non-human players. Both addressed issues in the news beyond the political, but Trudeau's satire was a sort of generational thing, aimed pretty squarely at himself and his peers (as I saw it), where one didn't know what one would expect from Bloom County from week to week, be it Star Trek gags, an attempt to stop Steve's smoking, Opus' engagement to Lola Granola...

The comic is not to everyone's taste (I don't think The Admiral ever cracked a smile at the strip), and these days it reads as a time capsule of the day's headlines, anxieties, fads, phobias and cynicisms that younger readers may not entirely recall or understand. Do they even know the weight of a phrase like "Jim and Tammy"? Or why we thought introducing Bill the Cat to sell merchandise to the masses (as originally presented by Milo) would be hilarious?

If a collection of Bloom County is possible, then perhaps the follow up series of Outland and Opus? And maybe the UT strip, Academia Waltz? Who knows?

Anyhow, I'm pretty excited.
Posted by The League at 8:59 PM

Bloom County was/is my favourite cartoon every. My first experience with what is now called back matter was the 2 song LP included in Billy and the Boingers Bootleg. I played U Stink, But I Love You until the plastic wore out.

This is very exciting news.

I was actually wondering if that double-sided single would be available in some format or other. I'd love to hear that song again. Excellent use of the tuba in that one, if memory serves.

As a wee lad, I read my father's gingantonormous collection of Peanuts, BC and Wizard of ID strip books along with the endless supply of MADs. A connection point between I and my father was(still is) the comics.

I don't think he particularly cared for Bloom County, but I loved it. I'd like to point out that close to 80% of the humor went over my head, which gave me delicious pleasure in re-reading them as an older teenager as politics came seeping into my brain. I bought four, maybe five of the anthologies and still drag them out to re-read. I think Calvin held sway as my childhood favorite, but I bought more Bloom books, so what does that say?