I really can't recommend the Scrooge McDuck and Donald Duck comics enough for fun, all-ages reading. It's a little cost prohibitive coming from Gemstone, but when the stories are coming from Don Rosa or Carl Barks, I always feel I got my money's worth.

I particularly recommend the very reasonably priced "Life and Times of Scrooge McDuck" and it's companion volume.

The two collections act as a flashback, going back to the days well before Scrooge obtained his moneybin, which you will remember from the 90's-era cartoon, Duck Tales. Duck Tales was based upon a very, very long running comic series which has an insanely devoted, international audience. These days, a lot of new Duck material comes from Europe, where, I guess, the Ducks still have a strong foothold. 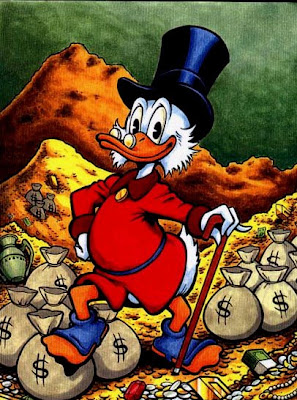 To give someone an idea of the scope of the Duck comics, but not to intimidate anyone, because you don't need to know all this to like the comics.... here's a family tree of the characters in the Scrooge McDuck, et al comics.

The series did begin before modern sensibilities took hold, often regarding a dated typical anglo-saxons view of much of the world. And so you do, occasionally, have to grimace through a less-than-PC take on foreign lands, etc...* The Barks and Rosa** stories are well plotted, usually surprisingly well-researched, and as big on adventure as they are on comedy, which is saying something when Donald Duck is a major player.

*While I obviously don't agree with the outdated portrayals, etc... I also am deeply uncomfortable with dismissing material out of hand. Instead, I feel it's healthier to view it as an historical artifact.

**Rosa's stories are from the modern era and don't tend to reinforce outmoded or negative stereotypes
Posted by The League at 9:31 PM

OMG! Sometimes I wonder if we are sharing the same brain Ryan. I loved reading the Uncle Scrooge stories as a kid. Carl Barks and Don Rosa are heroes of mine. I even once spent way too much money on a limited edition Carl Barks book from the Disney store.

The "Life and Times of Scooge McDuck" is a great intro into the world of Disney ducks. These are some great comics for young kids. I think my love of mythology and geography owes a lot to do with the Barks/Rosa stories.

You are correct sir, everywhere I went in France and Switzerland the smiling faces of Donald and Scrooge were there to great me. If I only I could read French and German it would have been perfect.

I picked up a few on free comic book day. My daughter was enchanted.

It's buying the same comic over, but they released the first collection of Tiny Titans today.

I'm planning on being at the Windy City Comic Con in September where I'll get a signed copy of the trade for me and my daughter.

Sweet! The Windy City sounds like a good Con. All we have our direction is Wizard World Texas, which always pops up around Thanksgiving, which is just a terrible time to be heading out of town, and the line-up is often not my cup of tea. This year, I think that's already been scrubbed.

We have STAPLE, but that's sort of by and for indie comic folks, more about publishing, etc...