So, yesterday League-Pal Julia P. alerted me that her sister, who is a student worker at UT, had landed passes to an amazing event on campus. And, apparently, Rachel's friends are a bunch of dorks with no sense off history or the American Spirit, because they passed up a chance to see three living legends.

This evening I joined Julia, Rachel, Shoemaker and a few hundred other folks to see a panel/ reunion of the Apollo 8 Mission members of Frank Borman, Jim Lovell and Bill Anders.

If you don't know who those guys are, well, you should probably watch more TV or whatever the hell I did to know who they were (I do read, occasionally, but let's be real).

Moderated by Jim Hartz, the panel more or less took Apollo 8 from start to finish, and gave Anders, Borman and Lovell an opportunity to share some great stories from the mission. And, of course, to describe what it must have been to have been to be the first people to see Earth from beyond orbit, one of the defining moments in human history. 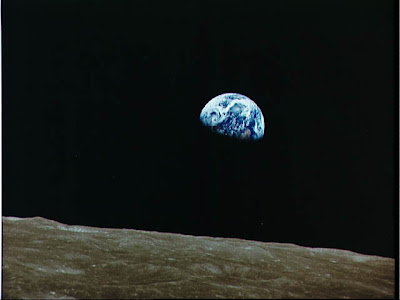 The first Earthrise photo, as snapped by the Apollo 8 mission

It was interesting to hear the context in which these gentlemen described how they thought of the space race, just as much or more a true front in the Cold War and a way to defeat our ideological enemies, as much as building a monument to innovation and achievement.

Some of the Apollo ground crew was in attendance, including Chris Kraft, one of the mastermind of NASA Mission control. The astronauts were more than generous in giving credit where credit is due, and reminded the audience of the extraordinary work that went into putting the missions together.

Its a tough night to describe. We've all got a little hero-worship of these guys, and if you don't, you should. These are the ones, both astronaut and engineer, who achieved the unthinkable and created a new way of looking at the world and the place of our little blue marble against the cosmos. And while they speak knowingly of the weight of the mission, its unpracticed and honest when all of them described the how's and why's of being a part of the Apollo missions in straightforward terms.

I don't know if mankind's destiny is beyond this little backwater planet on the edge of an unremarkable galaxy, but I like to think of how America and even Russia put forth their greatest efforts by their best and brightest to achieve the unachievable. That a war could be fought by sending rockets to space rather than at one another, and that in doing so, return to our planet wiser, with greater knowledge and with new dreams for mankind.

Lynda Johnson Robb mentioned that her father sent copies of the Earth Rise photo to every single leader of a nation, not as a sign of Earth's might or technical superiority, but as a sign of our world as it is. A bright dot against the dark, and that's what we have in common.

Years ago someone sent this to me for The League of Melbotis Christmas Spectacular, and its largely why I know about the Apollo 8 Mission.

On Christmas Eve, 1968 the astronauts of Apollo 8 were in orbit around the moon, unsure if they would return safely to Earth, roughly 238,857 miles from Earth. Family. Safety.

I had never seen or heard that footage. Thanks. What a cool opportunity, I'm jealous. You're right, not just heroes, but last of the true explorers. The kind of guts it takes to try and do what they did is remarkable.

I think it is also cool that when they were up there looking down on Earth and seeing the amazing expanse and glory of the universe, their thoughts turned to the Creator. So much so, that they felt moved to read from the bible.

If that were to happen today, sadly, half the country would be in outrage that government dollars and government airtime was spent on a religious message. And Michael Newdow would sue the government, and everybody would be demanding that on the next trip the read from the Koran, or from Buddhist texts, or from some Hindu texts, etc.

But to me, it is kind of interesting, whether you believer in Gozer the Gozarian, Zues or Jesus that these guys got up there, and felt the presence of God to the point they wanted to read from the bible.

Of course, you could say it was all a part of a giant government planned move to tie democracy with Christianity, and Communism with the godless masses, and that the whole thing was orchestrated by Billy Graham, the Pope, and Colonel Sanders, but anyway......, I found that touching.

They did talk about the reading of the passage.

As heartfelt a reading as it genuinely was, it was known what they were going to do for that broadcast before leaving Mother Earth. How that decision came to be is sort of interesting.

The astronauts were only given instructions to do or read "something appropriate", and they asked a colleague and his friend in the press to think about it. Apparently the two sat for hours and hours pondering what would be right to do, when one of their wives came downstairs and said "well, its obvious. Read from Genesis".

Aside from the utter appropriateness of the passage in that place, at that time, and for all the right reasons, the astronauts acknowledged that they also embraced that Genesis was also source of three of the world's greatest religions, but that may have come as after-the-fact. And liked the unity pulling from Genesis could provide.

I don't think it diminishes the story that it may not have been spontaneous, and I find it sits about right that someone involved as a wife of a friend, etc... could have casually made a suggestion that has meant so much and put the right words into their hands at the right time.

I remember the night well. Your mom and I were driving from north Miami to South Miami (my mom's to my dad's) on Christmas eve. we were waiting for those guys come out from the back side of the moon for the very first time. There was a concern that the gravitational effects would be wrong and they would be slung into the far reaches of the galaxy. It was a great feeling when they first came back on the radio. Brave indeed!

I'm more of a questioning agnostic than a devoutly religious believer, but I appreciate the sentiment of the reading, and I'm glad to hear that they took a number of religions into account when selecting the text.
Personally, when I look at the pictures they tend to make me think about the fact that we're mostly alone in the universe (undiscovered alien life notwithstanding), and that humans ought to be treating each other a lot more kindly (and treating our planet more kindly as well), given that our fellow man and the earth are really all that we have as we sail along together on this big, beautiful blue planet.
And heck, yeah, I gotta agree with Dad. Those guys were extremely courageous. I get nervous just going over the flyover from I-35 to Ben White.
Less wars. More space program!!!

An interesting note: these guys pretty much believed that the reason we had the will to make it to the moon was that we WERE at war. While I do not wish upon us another Cold War (I spent ages 8 - 14 waiting for the boms to drop), it was the competitive nature of the Cold War that led to this achievement.

Like so many things in life, I guess, its an uncomfortable wrinkle to the achievement, and seems almost quaint as the Cold War is now 20 years more or less over. But without that "perfect storm" of competition, will, budget and the right people in the right place at the right time, we could be like the Chinese, just now getting our first citizens into space.

Well, the Soviet Union has dissolved, but America certainly still has a very competitive streak and a desire to prove our leadership qualities to the rest of the world. We're also in need of ever increasing ways to drive technical innovation and scientific discovery, and our current economic downturn has left us in need of new areas of industry in terms of research, development, and manufacturing. Space exploration could potentially provide us with new discoveries, new technology, new resources, etc.
Anyway, the space program seems to give us some of the economic stimulation that the military industrial complex usually provides during a war, but without having to kill a bunch of people in the process.
I want space elevators, darn it.

agreed, Jason. I find it unfortunate that such a confluence of external factors would need to be associated with space exploration in order to advance the field.

I don't want to dismiss the opinions or perspectives of the astronauts, but if we're going to truly believe in our ideology of achievement, then I would hope we'd have better reason to expand our frontiers than something as petty as one-upmanship.

While I would certainly like to benefit from the advances in science which are associated with the space program, I'm interested in seeing us, as a species, extend our reach by heading for the stars. And, honestly, that may be something that takes more than what our leaders are willing to envision for us as a people.

Which is why I'm building my own rocket this weekend. Lucy and I will be back to Earth orbit around next Sunday.

Astronaughts are the coolest guys I don't know.