I met Matt circa 1996 when he moved with a crowd of friends from Colorado to Austin. I found his directness refreshing (the first conversation we had was him criticizing the album I was listening to when he walked into my apartment), and quickly found his curmudgeonly ways endlessly entertaining.

We wound up both working as students at the same office on campus, and both parlayed our student gigs into full-time gigs, and consequently spent no small number of hours together inside and outside of work. 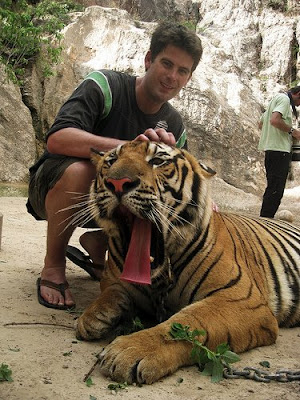 Obviously I enjoy the man's company as I was happy to have him crash here for a short while during the renovation of his condo. He's a frequent guest to Steans-Family holidays, and we enjoy having him around on game day, etc... He's the guy i actually will hand the tongs to over the grill, and defer to for food choices every time. Matt's a traveler (he was recently in Thailand, and is prone to head to Europe or wherever the wind takes him), a blackbelt in some form of karate, and is now a scuba diver.

He's a longtime pal, and I wish the dude the best of birthdays. 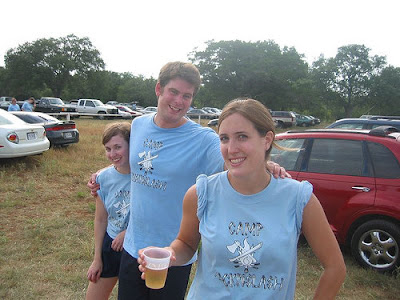 Denby, Matt and Nicole (Nicole is tucked under Mangum's arm there).
Posted by The League at 11:34 PM

That photo of Magnum and the tiger might be one of the coolest ever.