So, apparently today Marilyn Monroe would have turned 83. 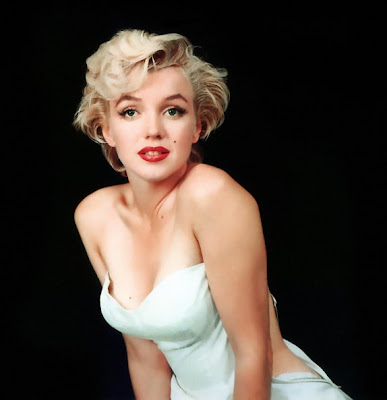 In high school, I was unlikely to hang a poster of Kathy Ireland or the other favorites of the day on my wall, but somehow I decided that it was perfectly acceptable to hang a poster of Marilyn Monroe. Actually, several images of Monroe, if memory serves.

I did watch a few Monroe movies (although my favorite still only really has her in a small part, John Huston's crime drama, "The Asphalt Jungle"), and read up a bit about Monroe in the way you did before the internet made that sort of casual interest all too easy.

Monroe's fame comes far more from her all-but-confirmed extra-curricular romances with JFK and possibly Bobby Kennedy, her downward spiral and the mysterious events surrounding her death than her film career, although she was in a few classsics. She also managed to marry not one but TWO American legends in Joe DiMaggio and Arthur Miller. (You put all this in one place, and its sort of mind-boggling.)

Her early death, of course, froze her in time in the mind's eye of America. And, I am certain, there have been many a theses and dissertation written on what it means that the American gold standard for WASPy beauty and sexuality is represented by Monroe.

Her contemporaries haven't enjoyed the same household name status, and its hard to think of anyone in the past 40 years who has attained her status as American Icon, even if stars such as Jane Russell and Jayne Mansfield enjoyed similar film careers. Moreover, it's difficult to imagine the entertainment industry of today creating another Monroe, either by intention or blind luck. 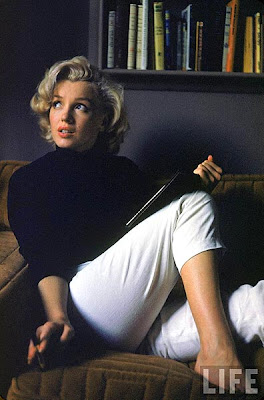 In the past twenty years it does seem that Marilyn (like Elvis, James Dean and others) has become such a part of the cultural landscape that it can be forgotten that she was ever more than a Halloween costume, or a caricature for failed starlets to dress as, standing out in front of Grauman's Chinese Theater for the tourists.

Maybe that's okay. The films will always be returned to by enthusiasts, and enough ink has been spilled for those willing to read up on the person behind the soft-lit photos. And that's far more than most can expect out of even such a short life.

Those are a couple of GREAT Monroe pics! Thanks for posting. I'm inspired now and may have to make her the subject of my next drawing!

I'll keep checking in with you, Mike. If I miss it, let me know so I can post a link.

Both of these photos are fabulous.

Poor Marilyn. So celebrated but so exploited. John Irving in a Prayer for Owen Meany had a very well written passage by the main character observing how America and Marilyn were both used and broken by politicians.