The League Watches "The Spirit" So You Don't Have To

I just finished watching the 2008 film "The Spirit" on OnDemand, and I think its safe to say... it's not very good.

Written and directed by comic superstar Frank Miller, its curious to consider how the movie wound up the way it did in the first place.

Eisner first launched The Spirit as a roughly 8 page weekly newspaper insert pre-World War II, trying to find a way to get away from the superhero fads and other things he didn't like about the conditions at many comic publishers. The strip ran for years, and attained great popularity, retaining cult status among a certain breed of comic aficionado, seeing occasional revivals and reprints.

Frank Miller (Dark Knight Returns, 300, Sin City) became friends with Will Eisner at some point, and the two put out a book of interviews and discussions, which I actually bothered to read a few years back. While Miller may idolize Eisner, the two have very different approaches to character and storytelling. 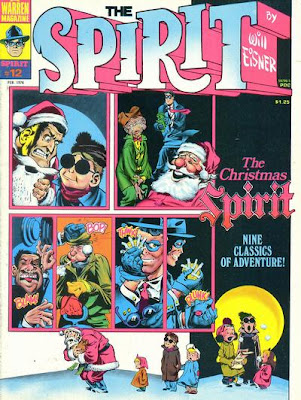 from some Spirit reprints

Following the groundbreaking success of Dark Knight Returns, Miller did some work in Hollywood, including screenplays for Robocops 2 and 3. However, the adaptation of Sin City by Robert Rodriguez, which maintained the look and panel-by-panel pacing of Miller's work, and cited Miller as a co-director, opened new doors for Miller on a much bigger scale than what modern comics affords. Paired with Zack Snyder's adaptation of Miller's original graphic novel, "300", someone in Hollywood felt that Miller could handle his own film project. And Miller, it seems, received the approval of the Eisner's to let him handle Will Eisner's most popular character for a big screen adaptation.

It should be mentioned... there was a 1987 television movie of "The Spirit". I missed it. I had a basketball game or band concert or something.

Oddly, Miller more or less abandoned the look, feel, story and everything about the comics that makes them interesting, and inserted a sort of sci-fi/ fantasy take on the events from the comics. Miller's worldview permeates the movie, with the Sin City look overwhelming Eisner's gritty but still friendly cartoonish feel to a stand-in for a North Eastern City, circa 1940ish that The Spirit seemed to perpetually inhabit.

Further, Miller doesn't bother to ever even make a nod to the kind of groundbreaking work Eisner did in page layout and as a master of his craft in managing the comic page.

The Spirit comics became often much more about the crooks and the stories around the people in the comics other than The Spirit, something in the manner of a lot of cop procedurals. The Spirit was cool, two-fisted and had a peculiar relationship with luck, but that was more or less a wink and a nod as a storytelling device. Tracking the past of Sand Serif, Wild Rice, or even a toy machine gun was much more likely to fill the pages of a Spirit story than following Denny Colt around.

The Spirit is a Peeping Tom

I do think its kind of a neat idea to include a handful of the femme fatales of the Spirit comics into the movie. After all, Eisner loved drawing women and found many-a-way to set them up as the equal to The Spirit (not entirely common in strips of the time). While I felt that the movie could have used P'Gell, I didn't get hung up on it. It would have been worth exploring, however, how and/ or why The Spirit of the movie engaged all women as sexual objects when the back story suggested the opposite.

I find it puzzling that Miller would have been such a fan of Eisner's work, routinely complained about how Batman is portrayed on the screen, and then saw fit to take Eisner's creation and manhandle it. That doesn't begin to get into the problems with pacing and story telling that Miller runs into (let alone technical issues such as camera placement and that every shot in the movie looks as if Kevin Smith were DP, selecting mid-range, static shots that don't ever seem to move). One has to assume pride or ego are the culprits here, but I have no idea. I'd have to hear more from Miller. 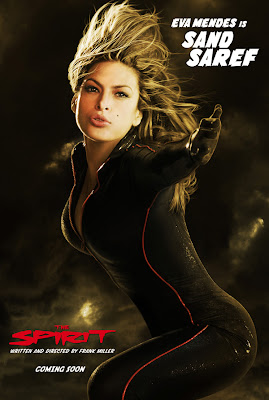 a good reason to watch the movie, but not good enough

Miller's sense of humor may also not jive with that of his own movie. The Looney Tunes-like fight sequence at the beginning seems less funny and more like a dip back into the post-Adam West-era of comic movie making where nobody seemed to be able to keep a straight face if they knew the source material were a comic.

Scarlett Johansson seems just happy to be there, even if she is rightfully lost as to what is actually going on. Eva Mendes is a lovely woman, but there are places where even in this mess, she seems a bit out of her depth. I do give credit to Gabriel Macht for probably being as solid a portrayal of Denny Colt as you're likely to get. And I can only hope that the set makers could keep up with all the scenery chewing Samuel L. Jackson was responsible for as The Octopus.

All in all, I'm not even sure its a renter. The look is no longer experimental, as we've seen it elsewhere to better effect. The pacing is grueling and the whole thing just feels like maybe someone should have stepped in and stopped this mess before they ever rolled video.
Posted by The League at 12:29 AM

I heard Frank Miller is gunning for the Buck Rogers reboot. The Spirit certainly didn't help his cause.

It is curious that a writer/artist so confident in his pacing on the page just completely loses it on a movie. Ultimately, I think that The Spirit as a concept and as a story never plays to Frank Miller's strengths. I'm just glad I didn't pay full evening ticket prices for this movie. He would probably be better suited to the Ninja Assassin project being produced by the Wachowski Brothers. But that ship has sailed with another.

I can think of many, many folks I would want heading Buck Rogers before Miller. Especially after this fiasco.

I would actually say that Hollywood needs to reconsider "Frank Miller: Director" before handing him any more money. Aside from adapting his own work, I'm not sure what I'd want to see him take on at this point.