The League Watches "Up"

I had today off, and so Jamie and I took the afternoon to go see Pixar's latest, "Up".

This post is going to be short as there is not a laundry list of gripes and complaints that I'd spend paragraph after paragraph cataloging. In fact, this was my favorite movie since last year's "Dark Knight". All though... this movie has less punching and fire. And its probably my favorite Pixar movie since Incredibles (and, Leaguers, I loved Wall-E. This one just pushed all the right buttons).

Pixar's focus on story and character is generally much better than most movies in general, and is light years better than most all-ages entertainment. And the impetus for the story here is not what you'd normally sell as a kid's movie, just as I'm not sure kids would really get their heads around the existential dilemma of Bob Parr in "The Incredibles" that leads him to re-don the spandex.

The characters are very well defined, and the script features none of the relentless mugging that's mistaken for jokes in the average Dreamworks project that's the legacy of Robin Williams' "Genie" and trying to recapture the lightning in a bottle that was the first Shrek movie. Instead, the humor (and tears) come straight from the story and characters. 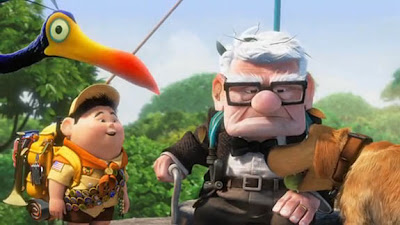 Our protagonists. I really liked that bird.

The animation is fantastic, and I guess you can see this thing in 3D in the right theaters (we didn't miss it). But the character design, etc... all feels spot on, as do the various set pieces.

I would forewarn parents of kids under 7 or 8 that we had a scared kiddo sitting behind us. There's nothing too threatening popping out at the heroes, but I sort of think that because the movie does a good job of wrapping you up in the proceedings that when danger does occur, the kids may get a little more spooked than normal. There is a little more "life and limb" sort of danger than in Wall-E.

Two of our protagonists are not human. There's a huge bird whose name is actually a punchline, so I don't want to give it away.

And, of course, there's Doug the Dog. 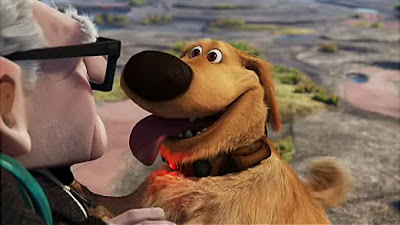 I have just met you, and I love you!

For all the tear-jerking and hilarious moments in the movie, the parts with Doug were my favorite. (If you like dogs, this is really a good movie for you.) But it was also a little sad, given our year, only because Doug was, more or less, Melbotis.

There are some great action sequences, and I know I was never bored, and neither did the kids ever seem like they were growing impatient (just wait for the little planes to show up).

Anyhow, I don't have much else to say, other than that I hope you Leaguers see it, and hope you enjoy it as much as I did. Its also great to know that Pixar's collection of talent is so deep. While I love Brad Bird and the rest, these guys really knocked it out of the park.
Posted by The League at 10:02 PM

All of this talk of animation-induced tears in this movie (not just in this review, but several others that I've read) has made me wonder why it is that animated movies seem to be able to evoke strong emotional responses in us so much more readily than live action movies with human actors. I can remember a number of animated movies that have gotten me choked up or at least very emotionally involved over the years, and very few live action movies which have produced the same reaction (despite the fact that I see a lot more live action movies than animated ones, on the whole). What's up with that? Is it because these animated movies just have a lot more thought put into them and tell better stories, or are our emotions somehow manipulated more easily when animated characters are involved? (it seems like maybe it's a lot easier to create characters who evoke particular emotional responses when you can control every single aspect of how that character looks and acts, because you've created that character from the ground up with the intention of producing a certain emotional response)
Anyway, all I know is that when Bambi's mom gets shot and Bambi is left all alone, it strikes me as devastating in a way that I probably wouldn't feel with a live action scene of a deer getting shot (or maybe even with an equivalent live action scene involving a human mother and child). I even felt some melancholy sadness for Wall-E when he's left all alone which I don't think could have ever been reproduced through the use of live action characters or robots.
It's a strange phenomenon, the human emotional reaction to animation.

It may be that the stories, as all-ages stories, tap into fairly deep seeded concerns of most people. Couple that with the fact that the design and story arcs most often set up our protagonists as innocents, and something may kick into overdrive.

But, yeah, there's something about animation that connects, maybe because in its seeming simplicity, any of the rest of the clutter of a live action film (having seen the actors on Late Night the evening before, etc...) simply doesn't exist.

Its a great question.

All I know is I cried twice in this movie. (Jennifer cried three times)

This movie handled sweetness with a tenderness that shouldn't have worked, but it did.