I don't see much of JackBart these days. He's a friend of Jason's, who I got along with pretty darn well, thanks in no small part due to a mutual love of horror and genre media.

Jack actually writes the stuff, though, as part of his career. He's sold a couple of screenplays, but I don't believe they've been produced as of yet (Jason will correct me if I'm wrong). However, he's recently sold one of his concepts to Boom! Studios, a comic company which I believe is based out of LA, and has recently employed League-favorite comic writer Mark Waid as its Editor-in-Chief.

JackBart wrote a comic about: Edgar Allen Poe. Coming in July! (so preo-order a copy of issue 1. Don't worry, Jason. I'll make sure I grab you a copy.) 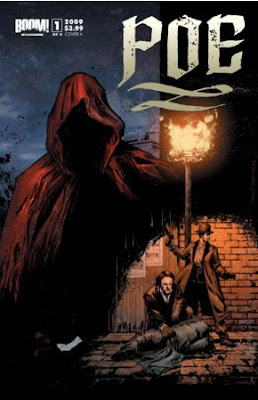 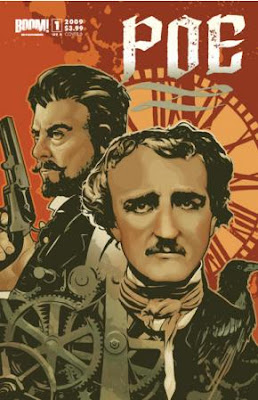 I'm not just excited that the Poe comic is coming, I'm excited that its coming from Boom!, who I think is doing things right.

In many ways, while I may champion the characters and stories of various companies, I sort of think that they have semi-broken business models that rely on the Direct Market entirely too much, which has led to a generation of kids having no interest in comics, not just from content, but a lack of availability.

Boom licensed several kid-friendly items, from Pixar's "Cars" and "Incredibles" to "The Muppets". And I seriously love the Muppets comic so far (Nathan and Michael might want to pick that one up for the family).

The rumor is that they're looking to move out of just working in the direct market and back into other kinds of retail (bookstores, maybe at box stores, etc...). In my opinion, that doesn't hurt the Direct Market (ie: Austin Books), but strengthens it as it builds a network of comic readers to feed into the Direct Market.

Poe may not be part of that effort, but I couldn't be happier for JackBart. And while he told me online that he hasn't met Mark Waid yet, I may send my tattered copy of "Kingdom Come" with him to ComicCon this year so Waid can sign it. And maybe my FF hardcover. And "The Life Story of The Flash". Well... I guess I'll have mercy.

JackBart has agreed to let me do an interview in a while, about when the book comes out. In the meantime, check these things out:

The Boom! Studios Blog
Posted by The League at 10:48 PM

Kudos to Jackbart!!! League, I don't know if Jackbart has ever been to your house, but it might be time to invite him over, so he can understand the depths of the madness.

JackBart has a standing invitation, day or night.