It was in the spirit of the old comic series, World's Finest, which had been the series launched in the 1940's which put Superman and Batman in the same comic (it had originally been conceived as "World's Fair Comics", to coincide with the 1939 World's Fair in New York). 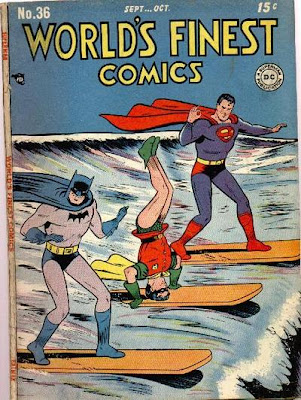 Comics are awesome. Oh, yes they are.

After 20 years of Dark Knight Returns inspired animosity, the powers that be at DC finally decided that just because Superman and Batman didn't always agree on methods, etc... they were more interesting as a mismatched pair of cops than they were as Batman being a jerk and Superman just standing there letting Batman rattle on (I mean, seriously... at what point would Superman not just start avoiding the guy?).

So was launched Superman/ Batman, with words and story by Jeph Loeb (the writer of Teen Wolf! and Commando!) and art by Ed McGuinness. McGuinness had come to notoriety through his work on Mr. Majestic, one of several Superman-like titles that popped up in the 90's explosion, and which was eventually folded into the DCU multi-verse (along with the entire Wildstorm Univere). He went on to pencil Superman circa 2001, and I actually have one of his original art pages from the "Our Worlds at War" storyline. 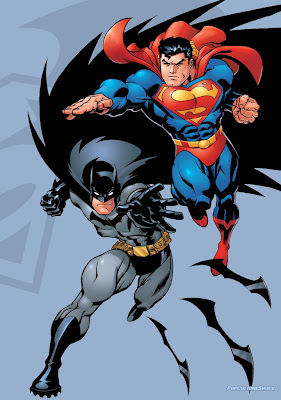 The first storyline was entitled Public Enemies, and drew to a close the long-running storyline set up in the Superman comics when Lex Luthor nabbed the 2000 election, becoming President of the United States. So what happens when he puts out a warrant for the arrest of Superman? And a bounty for his capture? Awesomeness. That's what happens.

Anyhow, I don't want to reveal too much, as DCU Animated is now bringing the story to DVD as an animated movie. The art style is probably as close as they could get to translating McGuinness's unique style to an animated form. They'll probably also have to drop a few elements of the comic tied to continuity, but I'm optimistic that this will be a really fun ride.

The comic was a big, ridiculous action flick sort of thing. Looks like the movie will be more of the same.

Check out a semi-legal trailer here.
Posted by The League at 8:27 PM

I am looking forward to this DVD of which you speak.