Over the past year or so, I've become a fan of Michael Kupperman's comic "Tales Designed to Thrizzle".

It's a little difficult to explain the comic and do it justice, but I enjoy features such as "Twain & Einstein" and "Snake n' Bacon".

You sort of have to imagine if Tom Tomorrow drew more than four things, and/ or could handily imitate different styles and sort of mix media.

He's also quite good at finding new angles on old ads one would find in comics and magazines. 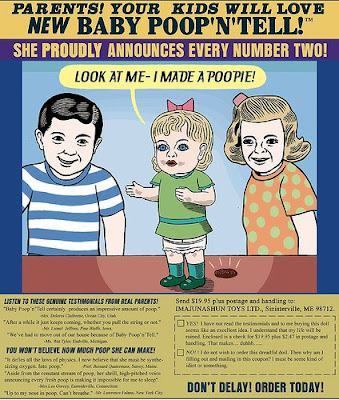 Anyway, they've adapted Snake'n'Bacon, one of Kupperman's strips, to a show on Cartoon Network's Adult Swim. 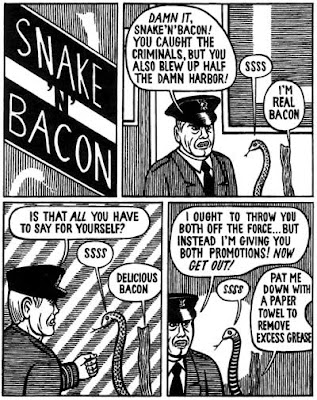 Having looked at this, my head is filled with questions about what the work says about the person recommending it..... (and what does my love of The Mighty Boosh say about me?)

Next time on Snake N' Bacon!

By the way, In finally watched Snake 'N' Bacon, and although I'm not exactly sure why, I think it's going to give me nightmares.

I make a great addition to a cheeseburger.