A long time ago, in a galaxy far, far away, JimD asked me to take a look at a screenplay he'd written. I was interested to read it as I'd enjoyed Jim's work that I'd previously got my mitts on, but then he let me know... he'd been working on the film for a while with his pal, Alistair (an occasional Leaguer). And, unlike most of the stuff I was used to from folks I remembered talking big from film school, they were actually going to get their movie made.

Sure, I gave JimD a few notes, but the script was sort of past that point. You could tell a lot of what was going to happen next would depend on directorial and actor's choices because the thing was ready to go. I liked the script, liked the ideas in it.

JimD and Alistair went ahead and produced the darn thing a while back, and I couldn't be happier for them or more impressed with the results. Sure, it would have been better if it had starred a certain chubby, yet good looking comic book fan, but I don't think you can argue with the results.

The movie is called "Pleadings" - it's about lawyers -, and I welcome you to check out the IMDB site. (They might want to add a plot synopsis. Just sayin'. I'm a little reluctant to say too much about the plot as I wasn't sure what I shouldn't say.)

It looks like the movie is ready for DVD distribution. No, I have no idea how the hell that works, so don't ask. 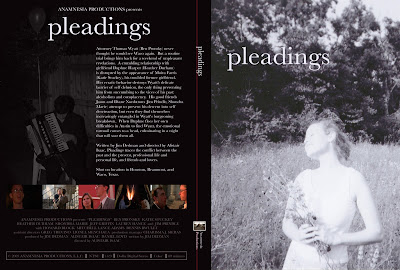 This here would be the DVD cover. Click on it to read the plot synopsis.

The movie turned out very well, thanks for asking. I think you Leaguers will enjoy it. Performances from their troupe are strong, the directing and cinematography creative and more than occasionally showing bits of brilliance. So there you go.

So I'll keep you guys posted as to when YOU can obtain a copy of the DVD for your very own.
Posted by The League at 9:47 PM

I told JimD he could not call it "The NTT Story".

It's awesome for anyone to make a project as momentous as a film a reality.

I hear that the "Other Crew" really made the key difference in the film. But, you know, that's just word on the street.

Seriously, it's awesome that "Pleadings" will see the light of day. Rock on, JMD!