Elvira at the Alamo

So, if it matters, no... I did not get to meet Elvira, Mistress of the Dark. There's a bit of tragedy to my tale.

I've talked about Elvira before at League of Melbotis, as a special October Dames in the Media the League Once Dug. Television icon, movie star and more... Elvira has outsurvived the vast majority of icons of the 1980's, when Elvira went from local LA curiosity to writer, star, rap artist, etc... of her own feature film.

Elvira had been invited to appear as a Guest of Honor for The Alamo's "Hey, Homo" series, and would host an evening at the Alamo Village further north in town, but Justin landed us tickets for her hosting of the 1988 feature "Elvira: Mistress of the Dark" at the Ritz.

I left work with a splitting headache, got a Powerade at the Wendy's and headed to Austin Books, where I ran into shop-owner Brad Bankston. Anyway, I almost lost track of time talking to Brad about all things awesome (dude, owns the best shop in Texas, or maybe The World. That's what happens), grabbed my comics and headed down to 6th Street.

For those not in the know, the way things work at the Alamo: you arrive early because they have a full menu and bar, so you can order food which arrives before and during the film (its not obtrusive, you just have to believe me). During that time, they show short films, videos, etc... tied to the movie. In fitting in with Elvira's past a B-movie hostess, we thrilled to a wide-array of 60's and 70's era low-budget horror movie trailers.

I was surprised Elvira didn't actually appear prior to the movie (except for calling down from her prize seat in a balcony), but I think it worked well. In a way, the 90 minute film was really a warm-up to the QA and appearance by Elvira which followed.

The movie is one I had only seen on home video, which Elvira explained a bit about. The movie did have a marketing push, but the week that the movie was to be released, distributor New World Pictures (former owners of Marvel Comics, natch) went bankrupt. This led to the movie not actually getting released in nearly as many theaters as originally intended, and it basically couldn't succeed.

However, I still think that the movie, especially once Elvira arrives to claim her inheritance, is pretty darn funny. And it has the best ending sequence. Ever.

I love a good musical number.

Yes, she was in full costume and character (although questions for Cassandra Peterson, her alter-ego, were inevitable). Yes, she looks exactly the same. I was pleased that Elvira was just as funny and sharp as ever, and rode that fine line of bawdy, brassy wacky and sweet that has been her trademark. Yes, all of that's apparently real. 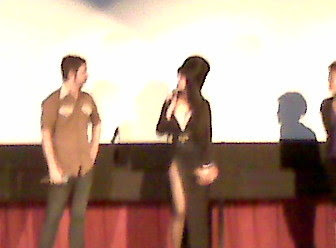 Elvira is a well-known animal-rights advocate, but it was hilarious to hear her complain about the poodles used in the production of the movie. And, you'll be happy to hear she still owns the Macabre Mobile.

Anyhow, afterward we were supposed to be able to go out and get in line to meet Elvira, get an autographed picture, DVD, etc... However.

The League had to go to Waco this morning by 9:00 for work. So, rather than get in line, I had to abandon my partner-in-crime, JAL, and head home. I wouldn't mind being a little sleepy, but that's almost four hours on the road and sleepy, and that's a terrible combo.

JAL, however, did not head home. And he made a new friend. 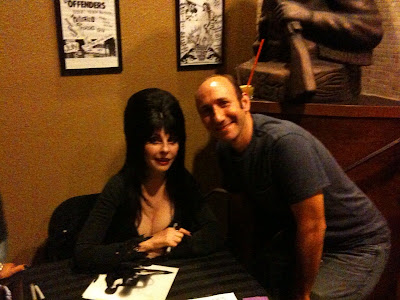 Reportedly, JAL landed me a signed photo, so I hope Jamie doesn't mind that finding its way onto my nightstand.

In addition to having a great time (thanks again for the tickets, Justin), I was glad to see what one of these events is like at the Alamo, and I think I'm a lot more likely to go back. The Elvira event, btw, sold out as fast as any other event they've had, in about ten minutes. Go figure.
Posted by The League at 8:24 PM

It's the runner and his laaaaaady friend!

Your comment makes me laugh in ways I cannot describe!