Whatever Happened to the Man of Tomorrow?

Nathan C. sent me this story from NPR.org.

The article discusses the classic Superman story, "Whatever Happened to the Man of Tomorrow?", now collected in hardcover by DC Comics.

This will seem odd to folks who don't follow comics, but in 1986, DC decided to "reboot" their comics, believing that the then 50 years of history were a problem for storytelling as well as bringing in new readers to comics. 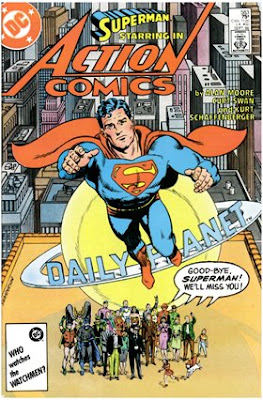 Editor Julius Schwartz hired an up and coming comic-writer from across the pond by the name of Alan Moore. Moore would set about telling a story about the last battle for Superman. It's an oddly melancholy story, and one of my favorites for many reasons (including Curt Swan's phenomenal art).

Anyhow, you guys probably don't care too much, but I'd remiss if I didn't mention the article as it discusses the reissue of not just a great Superman tale, but the drawing to a close of one of America's original myths.
Posted by The League at 9:54 PM

I do not claim to be "proud" to own many comics, but these are some of them.

Weren't you doing a bit about tear-jerker moments in comics?

You know I'm a dog person, and Krypto's final scene in WHTTMOT gets me every time.

Moore's WHTTMOT and Morrison's All Star Superman are my two favourite Supes stories of all time.

Fantomenos, I did do a post at one point about comics that made me cry. It was a bout a year and a half ago, and here's the link:
http://melbotis.blogspot.com/2008/04/comic-book-make-league-cry.html

Whatever Happened to the Man of Tomorrow didn't actually make me weepy, like We3, but I will say that the implications of wrapping an ongoing modern myth floored me, especially given the fates of so many familiar (and your mileage will vary, but beloved) characters.

And, of course, yes, the Krypto scene was particularly poignant.

As per favorites, that sounds like a great column idea for some day.