I mentioned this a few days ago, but in my post about San Diego ComicCon that there was news about the Jeff Smith comic, Bone.

Bone is an all-ages fantasy adventure that was originally a black and white comic series starting while I was in college. Since then, its been collected and colored, and reprinted a few places. And, Leaguers, I can't recommend it enough for you and for your kids. Like Harry Potter, its really "all ages". 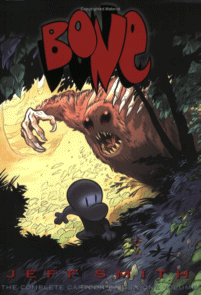 The name of Bone, by the way, refers to the species of the titular characters, Fone Bone, Smiley Bone, and Phoney Bone.

However, Bone was a single, lengthy story. Which is neat, in its way.

But now Smith is bringing more Bone stories to comics, and that is nothing but good news!

There's an amazing amount of "not getting it" that goes on at ComicCon. Last year it was the reported groping of costumed visitors as well as costumed reps (ie: Booth Babes). Which wound up creating the Con Anti-Harassment Project (that there need be such a thing is pathetic).

On the "Blackest Night" panel, DC editor Eddie Berganza, the guy responsible for changing Supergirl from this to this, seemed to embarrass a lot of folks on the panel (at least from the awkwardness on the podcast) when he began going off about how this character and that character were "sexy". Eddie, dude. Stop it. People already look at you funny for the whole Supergirl thing and we sort of blame the Star Sapphire redesign on you, too.

And, trumping seemingly everyone, EA, the video games company, challenged con-goers to send them pictures detailing their "acts of lust" as part of a promotion. If the con-goers won, EA would turn out their spokesmodels and force them to spend an evening with whatever nerds had, by definition, harassed the most spokesmodels at ComicCon.

Even DC doesn't make bonehead moves quite like that.

I don't know who runs these things, but it's stuff like this that makes me weep for how marketers target young adult males, and that legal and staff members at these companies don't blink when this stuff is suggested.

Update: EA has apologized, etc... I don't know if I care. (a) This was an utterly predictable outcome, and they should know better, and (b) I sort of suspect they knew that they could get this reaction, and that it didn't matter as long as it built product awareness. So I am not linking to the apology.

Because you are a fellow of discriminating taste, sir.

I find it so odd to think that mouth-breather-con is now the tail that wags Hollywood's dog.

As something I'd happily attend and that has plenty of highlights, I'm not sure I'm comfortable with calling it "mouth-breather con".

For good or ill, the past year demonstrated that ComicCon is not the best place to figure out the success fo your film. After all, ComicCon led Hollywood to believe that Watchmen (and a few other projects)could not fail. And this year really didn't have that huge comic movie (but it did have Watchmen, The Spirit, Punisher: War Zone, etc...).

To me, therimary difference is that this is the audience Hollywood wants to court, not completely dismiss as was the case until a few years ago when directors would go on Leno or Carson to make sure the public knew that THEY didn't read the comics or find anything worthwhile in them. Now these guys are tripping all over themselves to explain how they've caught up and now love comics.

I'm not sure I understand the criticism of this Berganza guy. It seems like the comic industry has been relying very heavily and cashing in on sex appeal for decades (half of the characters look like genetically perfected underwear models who are wearing only body paint and floating in zero G), but it sounds like Berganza's just sort of discussing it openly. It often seems like the comic book industry has a very strange relationship with sex. Sex appeal seems like such a powerful, obvious force in so many things that the industry produces, but comic book fans often seem sort of in denial about this fact (or are at least publicly in denial about it). Maybe part of this involves the fact that we associate so much of this stuff with youth, with kids, and/or the innocence of our own childhoods.
Anyway, maybe this Berganza guy is a total lech- or maybe he's just talking honestly about some things that have been there for a long, long time, but which haven't often been openly discussed.
Anyway, I'm pretty convinced that sex appeal plays a pretty big role in selling comics (not all comics, but definitely a substantial number of titles). This isn't necessarily a bad thing, but maybe a larger, more honest conversation about the role that sex plays in the industry might be a good thing. Problem is, the conversation would actually have to be honest (people can yell all day about how they don't want comics marketed on the basis of sex appeal, but if the companies sell tons more copies when they put characters in skimpy, revealing costumes, then there's a disconnect there and the companies are going to go with profit every time).
I know people are already talking about some of this stuff, but the whole Berganza issue just sort of brought up this whole tension between the more innocent ideals associated with comics and some of the sexiness that appears within them with increasing regularity, and it just seems like such a strange schism...

I agree with Jason about this. There's a reason why they cast ScarJo and put her in a skin-tight leather suit. Nobody's complaining about that costume.

I also didn't hear any complaints about Hugh Jackman shirtless in leather pants, or Brandon Routh in his tights.

I think I'm going to address this in a column, rather than in the comments. Suffice it to say, I believe Berganza is just a lech. There's a difference between talking openly, and going out of your way to redesign a classic character to look like she should be working at "Scores". As well as his infamous column about Supergirl. The dude has a history I don't expect anyone else to be aware of.

I would suggest that there's also a perception that cheesecake is such a hot commodity. The last sales charts I looked at had a Paul Dini Gotham Girls Book at #32. The next two appearances occurred around #70 and then around #130.

I'm crazy excited that Jeff Smith will be coming back to the Boneverse. I bought the whole thing in black and white then again in color to read to my daughter. I'll buy anything that he puts out.

I like the idea of Smiley Bone as a scout leader telling tales around the campfire. That should be hilarious.

Then followed up with another adventure. I'm in heaven!

Did u erase my comment or did I hit the wrong button? I'm not sure that sales figures about a book focusing on the lives of women necessarily conflicts with the argument that sex appeal helps drive the comic book industry, and I think there are A LOT of people in the comics who look like they could be working as exotic dancers (probably male and female alike).
Berganza may be a lech, but I still think the comic industry has strange attitudes about sex and sex appeal, especially given the fact that I still think sex appeal plays a substantial role in selling comics.
Anyway, I await your further thoughts on the subject.

I know better than to erase comments. You hit the wrong button, I'd guess.

My point on sales was: Comics which have served the purpose of T&A (not comics about women, which is a completely different topic) don't make enough of a ding on the sales charts to be the strong driving sales force that casual observers would assume. I'm not saying it's invisible, but I also think its a slippery slope to point to any character in tights as a sexual object (if so, any form of dance is for perverts).

You may note, the Berganza-centric portion of this post was about the inherent issues of sexism at the ComicCon (ie: within the comic industry). If you think I'm suggesting that there aren't issues to be dealt with, that's incorrect. But I do believe that it can be addressed, and that it should be. When one hears repeated statements from editors like Eddie Berganza which confirm and reinforce what you suspect may be wrong, and you have a soap box (this blog) to mention how DC and comics can do better, I have no problem singling him out from the crowd.

I don't really think its useful to debate the idealized human form of superhero comics (nor do I think its quite as canned as most folks suggest, if you bother to pick up the comics). And certainly the comics in the top 20 or so largely refrain from bad decision making.*

Which, I think, is part of why the DC panel sounded sort of embarassed for Berganza. He was focusing on something in a way that was not reflective of actual content, and it was more likely to do damage to the comic than support it.