The League Returns From An Important Excursion (Part 1)

I think Jamie is planning to do a post summing up the trip to The Bay Area/ aka: San Francisco/ Berkeley/ Oakland. I can say that we had a phenomenal time with Doug and Kristen, saw some sights, ate some foods, and generally packed a lot of good times into a very few days. 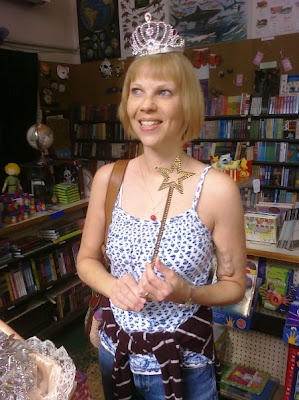 Jamie is the princess of Berkeley

1) Samurai exhibit at Asian culture museum near San Francisco City Hall.
2) Hanging off a trolley and enjoying industrial-age mass transit
3) A too-brief trip to Oakland's farmer's market
4) Finally seeing the 'tween movie sensation "Twilight", with Rifftrax and lots of wine
5) Thai food and "Krazy Thai Koffee" (the secret ingredient is love. And vodka.)
6) Comic Relief in Berkeley
7) King Tut exhibit
8) Mr. Mopps toystore
9) Taking the 1.75 hours you have to kill and getting to meet comic scribe Geoff Johns, one of my three or four favorite comic writers (I have no ranking systems) at Isotope comics
10) Reasonable temperatures

Leaguers may know that when we have an opportunity, The League likes to see comic shops in other towns. Sure, we'll always return to Austin Books, but its also a lot of fun to see what other shops are up to. Berkeley's Comic Relief is known a bit outside of the Bay Area, and Isotope has a great reputation out there in the world.

And, apparently, its a reputation richly reserved. Isotope may not have the square footage of Austin Books, but its a beautiful shop, and the staff was certainly in top form for the Geoff Johns visit. Owner James Sime is a bit of a comic celebrity, a rarity for a retailer, but he's managed a column/ blog or two in his time and made a name with customer service and high profile signings. Isotope has also received a lot of credit for its welcoming interior, which features some dangerously comfortable furniture.

We had tried to get in to see items from King Tut's tomb (but not the sarcophagus itself), around 12:30, but tickets were sold out until 5:30. We bought tickets, toured some terrific galleries at the De Young museum, and while eating hotdogs in the park, pondered our next move.

I had known Geoff Johns was at Isotope, but did not wish to, Sinestro-like, impose my will upon everyone else, and so didn't push on the subject, but we DID have a few hours in there, so...

We arrived just ahead of time, and I lurked a bit, eventually winding up in line with some really nice folks, just 8th in a line that went to the door. The guy in front of me had library-bound his entire Flash run (I had heard of this practice, but never seen it), and the as most folks in line were NOT from out of town, had brought significant items to have signed.

Johns took as much time with each fanboy as they wanted and was happy to chat.

Leaguers, I wish it were not the case, but when faced with Johns, I totally froze. It's not that surprising. I did the same when I met Tina Weymouth and Captain America at Universal Studios, Florida. Johns was gracious and was willing to talk less about Blackest Night and more about Legion and Superman, but I blanked in asking about Adventure Comics and a thousand other things I would have happily asked him about had I not totally clammed up. I did get out a question or two about the upcoming "Secret Origin" series. 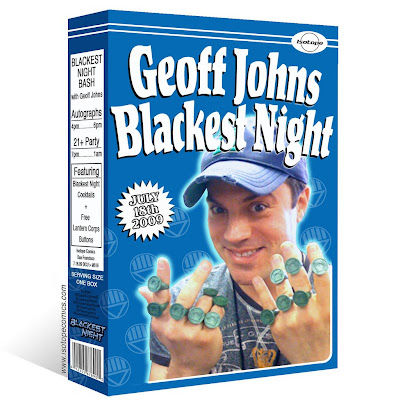 I had mentioned, while in line, that I was from Austin. While Johns was signing my purchases, James suddenly presented me with a copy of the Blackest Night #1 variant cover edition for Johns to sign. For free.

That, non-comic nerds, is about the awesomest fanboy moment you're likely to have, short of Green Lantern himself showing up and recruiting you for the Corps.

I did plug Austin Books to Johns, and implored him to come to Austin. I know we'd treat the guy right. And I didn't throw up, which is something entirely likely to happen when I get that excited.

Anyway, thanks to Jamie and Doug for schlepping all the way across the city with me to Isotope. Thanks to Kristen for picking us up. And thanks to Isotope, James and Johns for adding a classic fanboy moment to what was already an outstanding trip.
Posted by The League at 10:22 PM

Glad you're back safe and sound.

Sounds like fun. Glad to have you cats back in the ATX!

Wow, you had me at Samurai exhibit and then you met Geoff Johns! Sounds like a great time. Tell me, did Geoff pop any fanboys heads in a shower of blood and innards?

On two separate occasions there were head poppings. And a single occasion of "a farewell to arms". Do not get between the man and his water bottle.

Extra news: Saw today that Johns is doing the treatment for a Flash movie. Whoo-hooo!

Yeah, DC seems to be heading in the right direction by using Johns, Morrison and I forget the 3rd guy as consultants.

I believe it was Marv Wolfman. He doesn't do as much at DC proper these days, but I know he's been involved in TV projects and a few other things.

I think I would have liked to have seen a Johns/ Morrison/ Waid Flash script. That would have been interesting.

So you had a chance to facedown Johns and didn't go "What the @#$!! is up with Prime? HuH?? He's like jumped the shark while nuking the fridge with a multiple reference in TVTROPES. Give it up already man! Jeez just let Didio give him a monthly."

Or at least that's how I would imagine it in my anonymous fandom fantasy.

Well, Didio tried to make him a central focus of Countdown, and... didn't work so well. We'll see what his fate is tomorrow if you pick up "Legion of 3 Worlds".