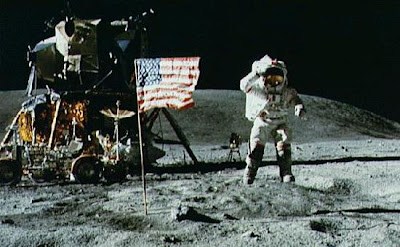 Firstly, its mind-boggling to me that the moon-landing has become a pet conspiracy of people who cannot fathom achievement. Your belief that "we didn't have the technology in the 1960's" does not, in fact, make it so. NASA sent brave men into space, just as they do today. We might as well have said the same about any explorer who ever stepped out of your personal view.

Secondly, far be it from me to wish for another Cold War, but I cannot imagine an America today in which our citizenry has the will or which would be willing to fund the effort it took to get us to the moon. Not when we firmly believe that every tax dollar spent is wasted if its not spent on us, somehow.

That said, I am of a belief that we'd be better off leaving Earth's orbit for altruistic, and/ or scientific purposes, and not for corporate or commercial purposes. Though I suspect the minute that someone figures out how to exploit the rings of Saturn to build a sharper television, that will be what gets us past the moon and out into the rest of the Solar System. Maybe Bradbury's Martian Chronicles (aka: "The Silver Locusts") had too much of an effect upon me as a youth, and maybe I've had The Prime Directive beat into my head entirely too much over the years, but until our imagination reaches beyond exploitation, I'm not sure we're ready as a species to break free from El Sol's pull and join whatever else is out there, moving between stars. 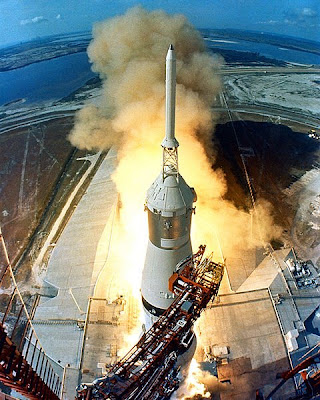 That said, its the spirit of competition which saw Apollo 8 ring around the Moon, and Apollo 11 touchdown on cosmic dust. I'd like to see that exploratory spirit, free of commercial enterprise, guiding us outward, so that when we can look back at our blue marble, we appreciate what we've got here all the more.

Today, The League salutes not just Collins, Aldrin and Armstrong, but the entire flight crew of Apollo 11, and the armies of nameless engineers, scientists, ground crew, and everyone who made Apollo 11 possible. We've had a unique opportunity as a generation born after Apollo 11, to grow up believing, utterly and completely, that with imagination, determination, intellect and will, humanity has no limitations. And I dream of seeing that again in my lifetime.

And, dammit, if its isn't a little sad Cronkite died so very close to the anniversary of the day he guided us through.
Posted by The League at 11:16 AM