Enemy Ace is a Poor Choice of Pet-Sitter 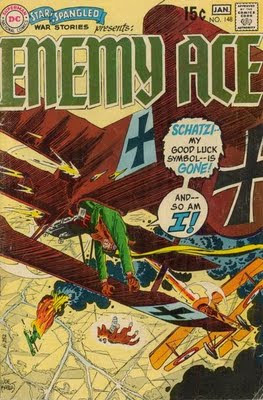 I have a not-great story about how occasionally I low-bid on items on eBay. I've been doing this for years without winning. It's fun. See a car online? Bid $100. See Action Comics #1 online? Bid $25, with the full knowledge that people are using sniping software to win their auctions and that you have no chance of winning before you've finished entering your bid.

About a week ago, on a whim, I did this again, bidding on an Enemy Ace GI Joe collectible doll. And... won. And while I bid a fraction of what I'd seen the item available for on auctions with a "buy it now" price..., I didn't particularly intend to win.

However, I'm now the proud owner of an Enemy Ace GI Joe doll. GI Joe and/ or doll collecting is a whole side of collecting I'm aware of, but do not participate in.

At least I got a really good deal on this thing, I guess?

Lesson learned. No more bidding "just to see what happens". Well, maybe for this. And this.

By the way, the story depicted on the cover above doesn't end particularly well for anybody. You can read up on it here.

Curiously, "killing puppies" was my example of choice for how one could cynically manipulate an audience when we talked over such things in film school. Some things just provoke a reaction, and its either a cheat or its crutch. But its also something I'd never actually seen done until Schatzi (a name, which, had we adopted a boy dog, I was going to try to slip in there to see if I couldn't get Jamie to bite before revealing the origin).

And while I don't feel Kanigher's story and the point of "the tragedy of innocents of all stripes in war" aren't effectively conveyed... ferchrissake, they doom a puppy.

You can see Sleestak's appreciation of Schatzi here.
Posted by The League at 11:13 PM