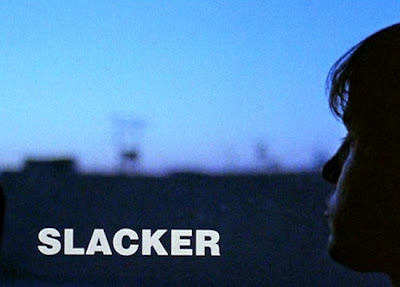 This weekend I watched "Slacker", the circa 1990 movie from Richard Linklater that more or less made the Austin film scene.

From the opening scene, its clear its an Austin that many in the town today will have found plowed under and turned into condos. Even the opening shot, looking out the window of a bus headed north on I-35 at dawn passes the location of what was Robert Mueller Airport, where today we have tract housing, Best Buy and a sea of chain retail. I think the only thing still standing and the same today in the extended shot is the McDonald's at Capital Plaza.

As a movie and cultural artifact, Slacker is a curious item to watch. I've come to have more personal feelings on the thing than I usually associate with a movie. Its a time capsule from an era of my youth when I was coming of age. Its a time capsule from a period in Austin that most of the people I know in Austin don't recall, or weren't in town for yet. It may also be responsible for some of the image making of Austin, which has led to the flood of people into Austin, which, in turn, has greatly changed Austin. In some ways for the better, and in many ways...

There's a scene about thirty minutes into the movie where a guy is buying a newspaper (a USA Today, I think) and he's at the GM Steakhouse, and the horizon is flat. The high rises of the intersection aren't even imagined yet. Traffic on Lamar is moving fast headed south. There's an auto dealer, Charles Coffey Motors, I think, that had been there for decades.

Today, Les Amis is gone. That whole area has been bought by real estate developers and they put in a Smoothie King and a Panda Express.

The entire film is, in so many ways, the same rush of sense memory you get when you step into your parents' house after being away too long. Or, perhaps even more, when something smells exactly how your grandparents' basement smelled, a place you would have to dig deep to recall when was the last time you spent time there.

Sure enough, time goes by. The town has always been transitory to an extent, memories are short. And those places were houses and other things that people may have lived in before I was imprinting on them as record stores and cigarette shops. Time waits for nobody, but that doesn't mean, I think, you can't be nostalgic. Or that you can't feel a bit of melancholy that time has marched on, especially when you wonder how you suddenly got so old.

Intentional or unintentional, there's something to the young faces of the film living in the old, unpolished parts of the city. In houses left over from grander eras, walking past the burnt out and unused warehouses that once made up several blocks of Austin (and which, from what I've read, on that land may have been brothels and bars before the warehouses took up the space).

Seeing people as I remember them from that era, not as how they appeared on TV from studios, or how they looked in catalogs, or taking their fashion cues from either. Texas accents. All that. It makes it tough to separate nostalgia (and what was at the time, recongnition) from any objective viewing of the film.

The content of the film, is, of course, the 2:00 AM-over-a-beer academic discussions of the 20-something quasi or pseudo intellectual, that rarely appeal to or fit in with the hours available in a life once you've rolled into a job, paying taxes, etc... Even when or if you fundamentally still agree or find yourself arguing with 20-something you. Its distended out to two hours, and at times its a bit much, and at times you want to slap the characters, but its also still a bit like slowing down and listening as you walk across campus. Students will always be students, and Linklater was just out of school (or maybe still in?) when he was working on Slacker.

And that's not going to do a lot for a lot of people. And I appreciate that. Or, I guess, I am aware of that. And the undercurrent of anarchy that's romanticized will drive some nuts. But, as I said, its a time capsule. And its not indicative of many people's time in this town, even lifelong residents.

My favorite scene is still that of the old revolutionary/ anarchist who takes a liking to the young man pointing a gun at him. That's going to be Jason in 30 years, so help me.

Admittedly, at one point, I was fairly certain that was pretty much what I'd be doing in my mid-20's (I was about 15 or 16 when I saw the movie the first time), and had I not jumped in that taxi, who knows where I would have diverged and seen this life as a dream, right? One does not work towards a history and film degree because one's life's plans are centered around financial security, 2 kids and a house in the burbs. It wasn't so much an aspiration as much as what seemed like a likely trajectory when you really have no clue what you're going to do with yourself beyond your 21st birthday.

Anyhow, its a movie I find odd in what a gut, emotional reaction I have to it for reasons that aren't necessarily tied to the content, although that certainly plays a part (at least as echoes of old voices).

Since the movie was released, the term "slacker" was co-opted, most egregiously by the movie "Slackers", which was sort of a gross-out comedy of no redeeming value. Various websites, properties, etc... have tried to take on the term. But, whatever.

All part of it I suppose. 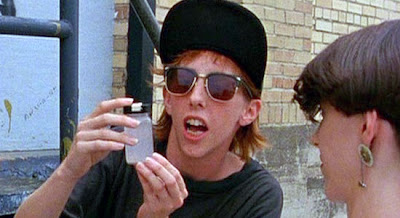 It's like getting a little closer to the rock goddess herself.
Posted by The League at 11:01 PM

As a regular visitor to Austin c. 1991-1995 (during my time at Trinity), I often recognize a lot of the places in the film. I don't have that same feeling of having lived there, but the last time I watch the movie I get this exhilirating feeling that comes with remembering and participating in some of those crazy discussions that you have in college. The same feeling comes from watching, and listening to, Linklater's "Waking Life," which I think is also a little bit better movie.

I really liked Slacker and still do. I remember one of my high school classmates, Paul Flippen, somehow diverting our senior year English class into a discussion of the movie which ended up taking up most of an entire class period. Not only is Slacker a movie to feel nostalgic about, but it was a movie that I remember relating to very strongly at the time that it came out. It's a film that sort of celebrates the "poetry within absurdity" vibe that used to be such a major part of Austin. These days much of that vibe has been commercialized and co-opted, but beyond the hipsters and the yuppies there are still some people who are determined to find their own way in the world, and other people who are supportive of such agendas. I'm still sort of proud of that. It's been an interesting trip watching this town "grow up", and while there have been some mistakes made for sure, I still feel like this town basically has its heart in the right place. I know for sure that there's nowhere else in Texas I'd rather live, and I'm not sure there's anywhere else in the country I'd rather be.