Between Doug and Kristen's impending nuptials and a co-worker of mine getting hitched up this summer, its difficult not to want to dole out wedding and relationship advice when you see you've been married for nine years and its going swimmingly.

I think we were lucky to have each had terrific role models for how a marriage can work, and family and friends who support us in our shenanigans.

But, really, what can you say about someone who works with you to make a good life, who is your best friend, your biggest supporter and who is the one person who doesn't think you're totally insane, even when she has to put up with you 365 days a year?

Leaguers, I tell you, the lady deserves a medal. I can barely put up with me, and I have to live with me roughly 18 hours a day.

I was going to give you a list of Jamie's finer qualities, but we'll bypass that. Let's just say she's the light of my life, she makes me a better person in the most sincere way I can mean it, and that every day is a welcome gift. All of this, i assure you, she will feed back to me sarcastically on Saturday when she's trying to wake me up and I'm grousing at her.

So... thanks, Jamie. Happy Anniversary. 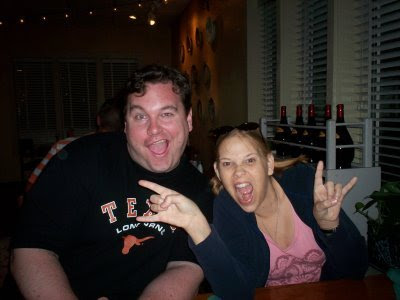 Nobody rocks the @#$%ing Olive Garden the way Team Steans rocks the OG
Posted by The League at 11:28 AM

Congrat to you guys!

Congratulations! That is wonderful!
-Denise