When DC's 3rd weekly series, Trinity, ends in a few weeks, DC is trying a new format for a few weeks as a weekly series. They're calling it "Wednesday Comics", and I think this could be one of the most straight up fun comics to come out of either of the Big 2 in a while.

They're allowing top-flight talent to run rampant across the DCU in non-continuity stories (I think). It's being printed on big ol' newsprint sized pages, I think, so its a lot of comic per comic.

Paul Pope released some panels from his take on Silver-Age Sci-Fi hero (who really harkened back to 40's and 30's era sci-fi) Adam Strange.

I've not been a huge fan of Jim Starlin's take on the DC Cosmos (with the exception of "Mystery in Space"), but I think its because I wanted less Starlin and more of what Pope is doing here: 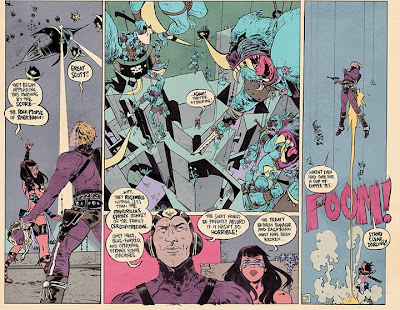 Something for you kids to look for.
Posted by The League at 9:41 PM

Did you and Jamie have this exact conversation last Saturday, or did I dream that?

Well, count me in. I have followed "Trinity" and find it enormously confusing, but the lightning in a bottle of 52 keeps me coming back. I even bought 10 issues of Countdown but was put off by its lack of Keith Olbermann. This looks pretty sweet!